There are many different reasons to create a costume. No matter if you like the character, have fallen in love with the design, while others like the challenge and sometimes the only reason is to look cool and have fun with all your friends in costume. Bringing the Malthael, the Angel of Death from “Diablo – Reapers of Souls” to life however had it’s own special reason: I just like his blades, ha ha!

As a part of my already released Prop Making Book I wanted to build some nice, interesting props to fill my book title with examples. I loved the design of the blades and so I build them, put them on my wall and was then kind of sad that they didn’t had any other purpose. Yes, they clearly needed somebody who can use them and so I also finished the rest of the costume. But let’s start from the beginning – with the progress of the soul eating blades of the Angel of Death himself! 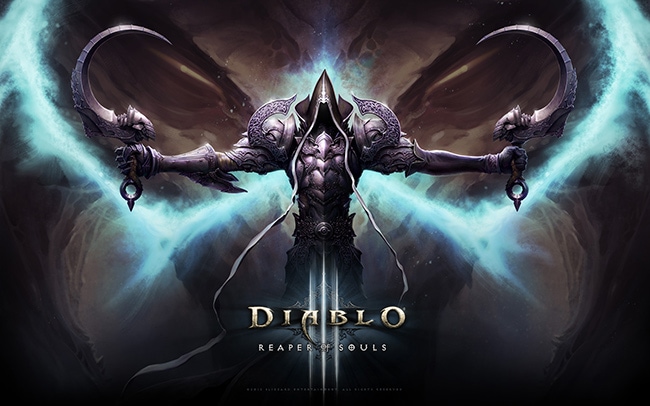 is clearly one of my favorite materials to work with. It’s affordable, easy to work with and if you are creative enough, you can do just about anything with it! While many people build impressive armor out of it, I prefer to use it as a core for my props. So, as the first step I got a good reference image of the blades, printed them out in black and white and copied the outlines of those life-size versions to the foam. 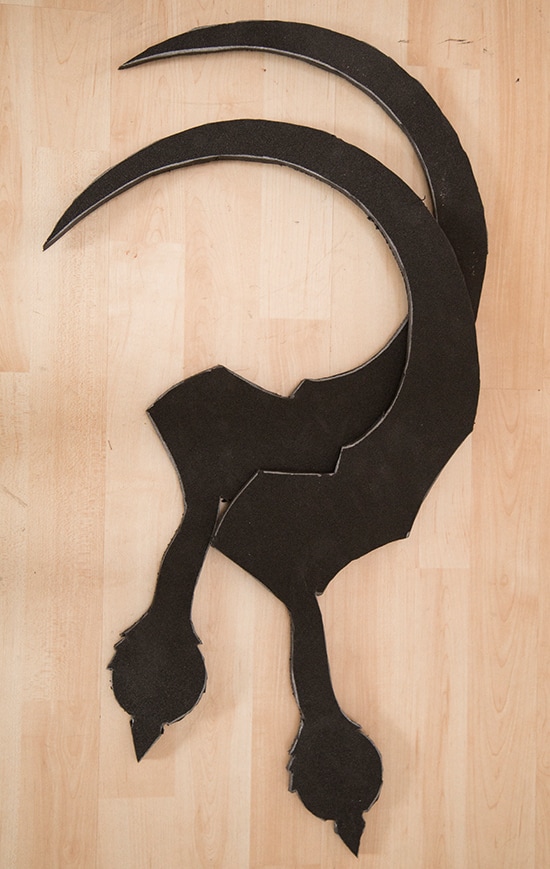 Now my dremel was really helpful to bring the foam into shape. Since sanding this stuff produces a ton of dust, it’s very important to use respiratory as well as eye protection. You can minimize the dust by pre-carving the foam with a sharp knife. 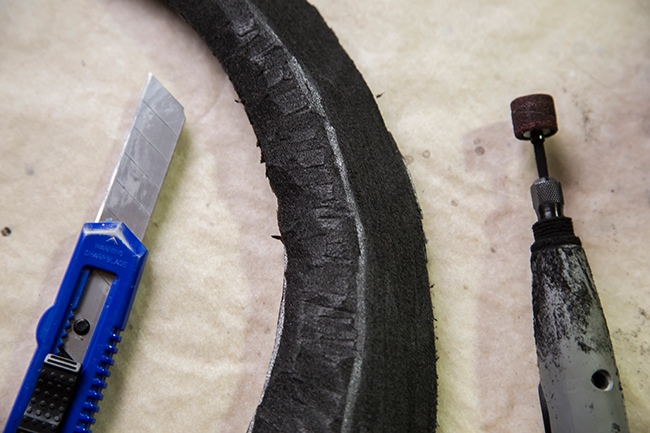 Another beloved material of mine is Worbla, which I use to cover the foam with. I like to keep my props solid and durable, plus I add a bunch of details later. So – at least for me – Worbla is perfect for that job. All you need to do is to heat up to pieces of the material by using a heat gun, cover the foam from both sides and press the edges together. Cut away the overlapping material and sand the edges nice and smooth with a dremel. I repeat this step for pretty much every one of my prop, no matter if sword, axe, bow or even spell book! Check out my Prop Making Book if you are curios! 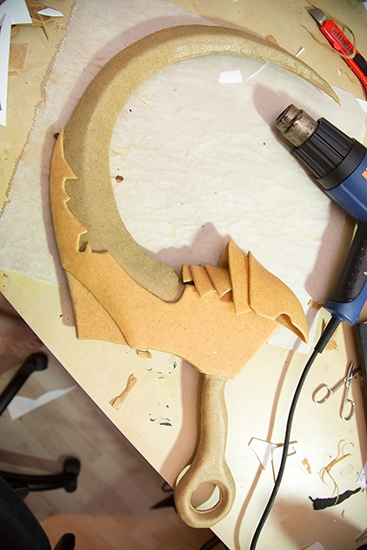 The first blade was actually just a test. Every project is something new, no matter how much experience I’ve already collected during my last builds. So I’m never really sure, if my plans will work out or not. Luckily the foam wasn’t too thick and the thin Worbla layer on top did a great job to turn the soft EVA into a solid blade. So I used my b/w prints again and used them also for the details of the build (the slightly brighter parts of the blade). 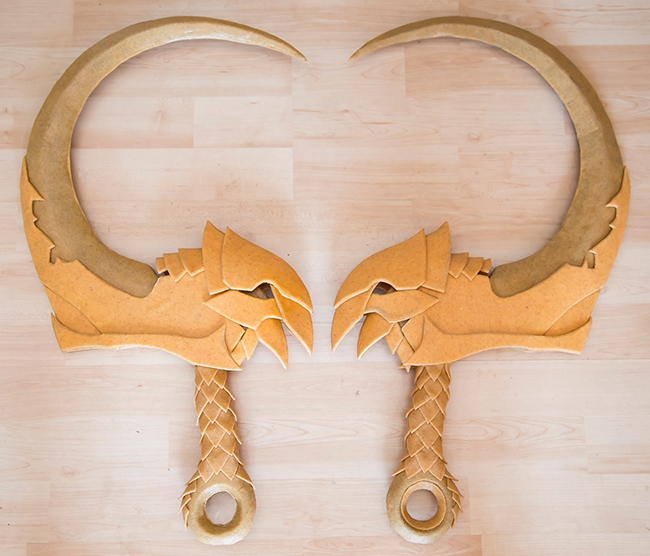 Since cosplay became my full time job, I have also pretty much the whole day for building stuff. With a good TV show that keeps me awake and a good amount of motivation I was so able to build the base of both blades within only two days! 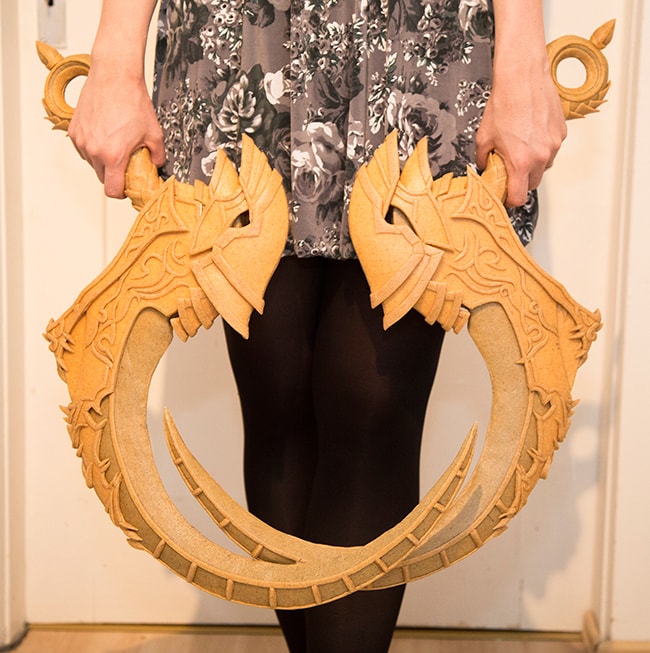 The additional details took me two more days. The jump from the base to the final build looks pretty huge, but in fact I added only some stripes of Worbla on the top to highlight edges and added some more ornaments. Since I had to apply the details four times (twice on each blade) it helped me a lot to draw all lines with a pen directly on the material and then start with the real detail work. Repeating and pretty boring steps like these require a ton of patience and time, so I kept my Netflix account really busy. 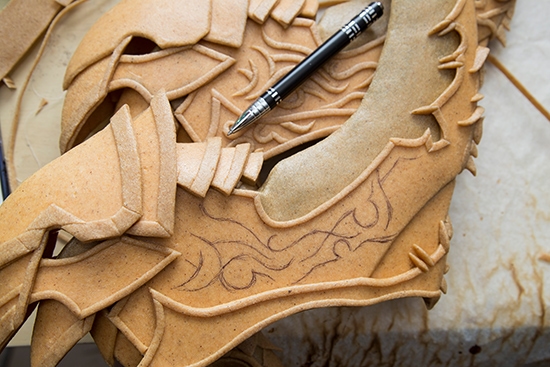 The final paint job was then done by my lovely husband Benni. We experimented a little bit with different techniques and so he tried out our airbrush for the gradient on the blades. The final part was still done with metallic acrylics

and with a brush by hand, but the airbrush was really handy to speed up the painting a litte bit. Also as you can see, the details are highlighted with our “well known” white lines, but I really like this cartoonish look which underlines even the tiniest detail. 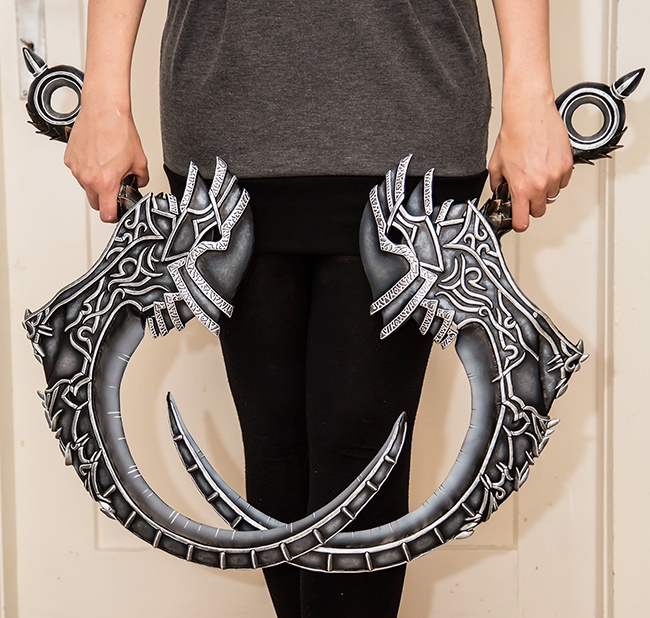 And here is a full step by step! I love these kind of collages! Check out more in in my Step by Step Collection btw! 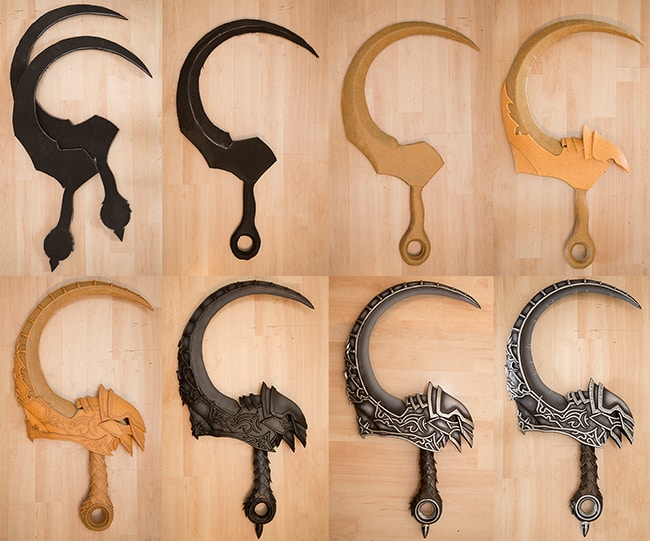 So, the blades were now ready for the book, but like I’ve mentioned they still were in need of a real purpose. I had to create a costume for them! Despite of I really love the design of Malthael, I’ve found a lovely cosplayer who inspired me to go for a female version of him. I’m just not really good in design and so I asked my good friend and artist Zach Fischer for a reference of my upcoming costume. We talked about my ideas and surprisingly he didn’t need anything more to turn my toughs into an amazing piece of art! 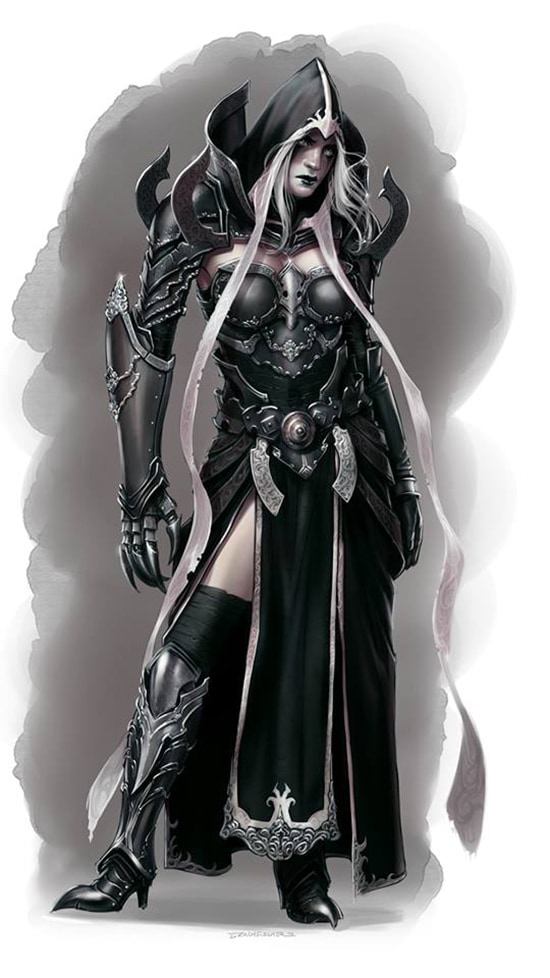 And aside from being “only” a super cool design, Zach’s artwork was also a step closer to my sewing machine. I wasn’t a friend of that tool – alas I didn’t like my sewing machine at all and tried to avoid working with it as much as possible in the last years. But I knew it was only a matter of time until I had to finally start sewing. So I tried to made a corset. I downloaded a pattern, followed the instructions, did a ton of mistakes and just hoped the result would be at last okay. Well, it was okay and I learned quite a few things that I should avoid doing next time. 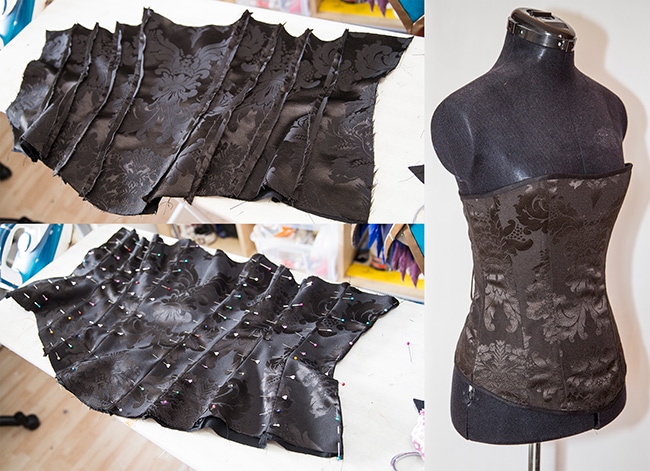 I clearly enjoyed building the armor much more! As always the pattern was just a basic bracer pattern from my Pattern Collection I altered a bit and added details on top. Creating patterns is always a bit tricky, but the more projects you do, the easier is it to find the right shape and size. So don’t be frustrated if it doesn’t work out the first time. Also just check out my Pattern Making Tutorial on Youtube! 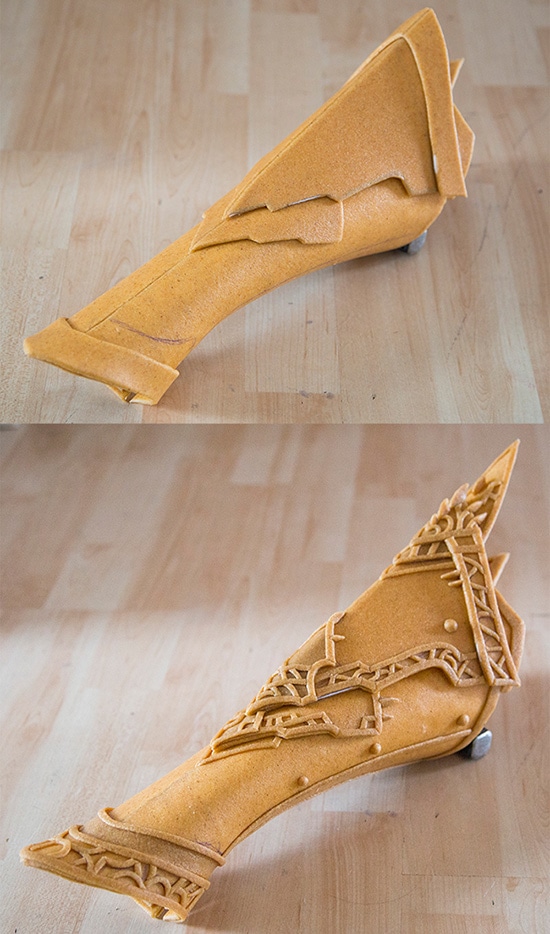 A little test with some claws on followed. Since nothing was really attached and fell of my fingers the whole time, it took me quite some time to take this photo, ha ha! 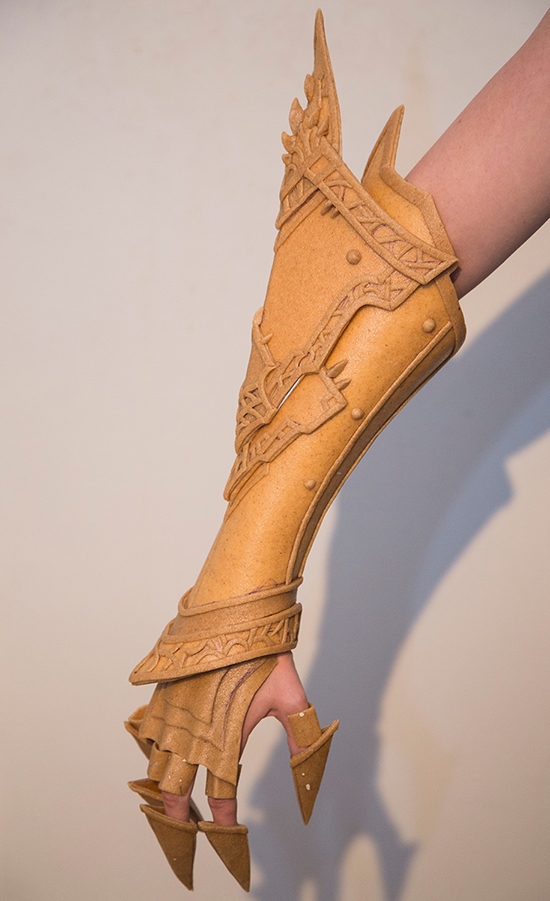 And this was the breastplate. You’ll also find a pattern for this part in my Pattern Collection. Or just check out my Breastplate Tutorial on Youtube if you want to see how I create something like that. All the stripes you see in this picture were actually everything I needed for making the details. Fold a big sheet of Worbla together, heat it up and cut it into stripes. Now just apply lines, curves and everything you like on your armor, it’s really easy! 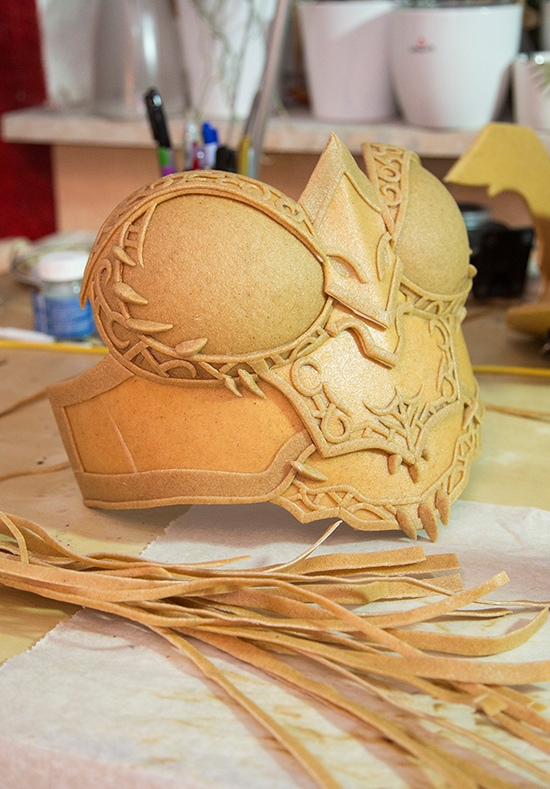 Now there is sadly no all-around solution for making patterns for pauldrons. These armor parts are always what requires the most experimentation. What I usually do is just draw the very base shape on paper, tape all parts together and hold them on my body in front of a mirror. I often have to cut more here and there, or even have to try it with a completely different drawing. Using paper however let’s you quickly and easily experiment without wasting any expensive material. And once you are happy with your test, you can start with the real work. And then add aaaaaall the details!

In my case however this wasn’t fun at all! I had to repeat the swirly design on these shoulder blade thingies eight (!!!) times! Took me a lot of energy drinks not to fall asleep during this work step! 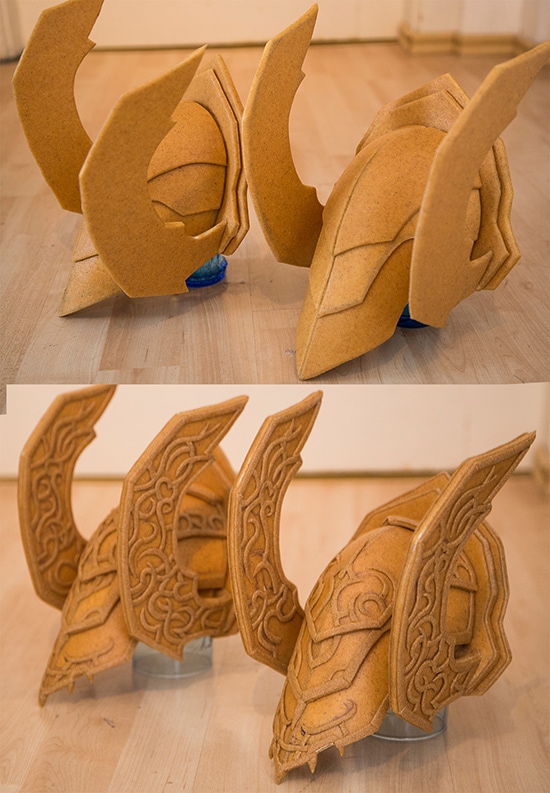 Now for the shin armor I can gladly offer you some basic patterns! These were again a bit adjusted and decorated. Not a big deal, but I really like the final result! 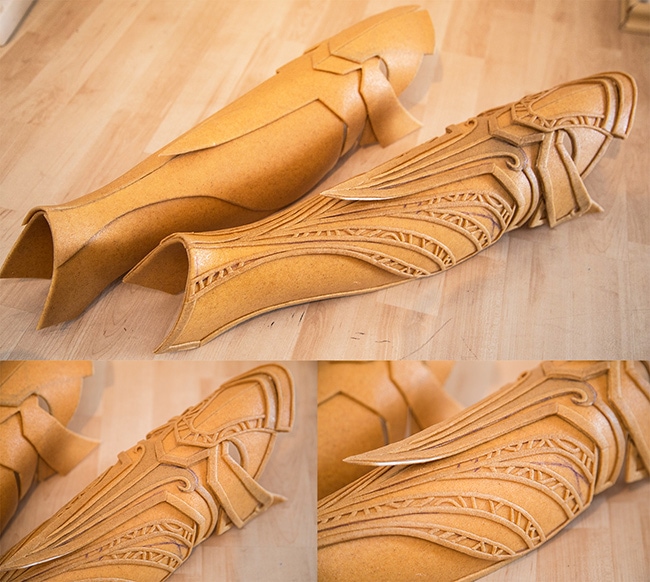 Well, and now I’m out of progress pictures and jump directly to the finished paint job, sorry! In fact I had only one week to finish the costume and this was far too less time to take any progress photo pauses! So I rushed like crazy to finish everything in time and had – just like before pretty much every convention – almost no sleep during the last nights. As you can see I added a bunch of armor pieces like a collar, a belt and hip armor as well as more smaller parts. 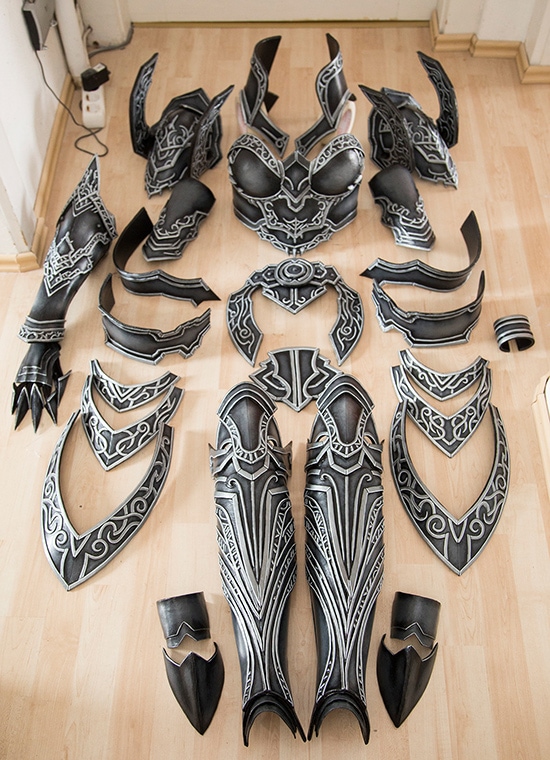 At the last day before my flight to San Diego Comic Con I finished the hood and the skirt and finally put the whole costume together. I didn’t use any patterns for the fabric parts at all, but the newspaper method works also for fabric parts. At this point I wished to have more time since it was a really rushed job, but at least the costume was done. It was a glorious night and it was finally time to pack my suitcases! 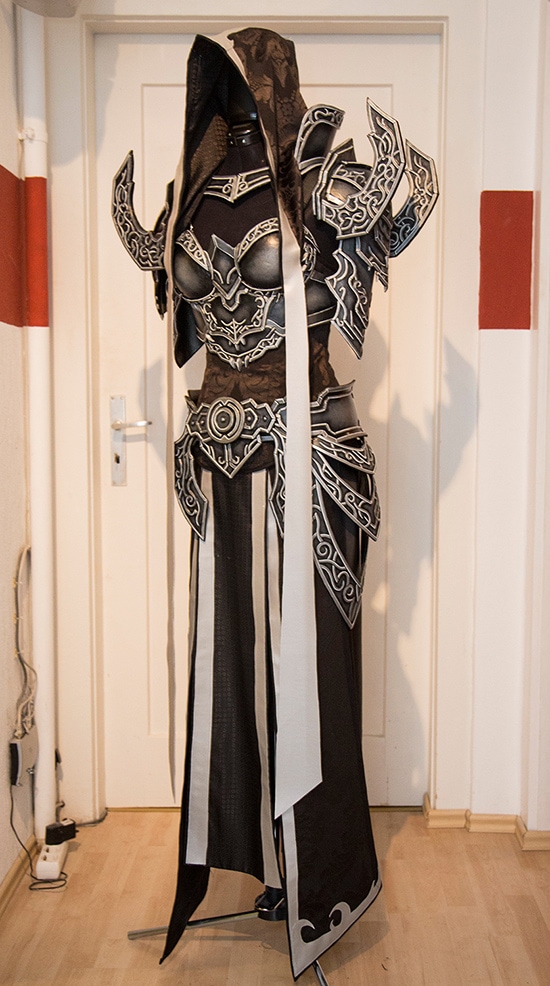 Well, and this was the final result of around one week of work: It tried to keep the make up a bit goth like – dark and how I would imagine him/her if he/she would have a face. 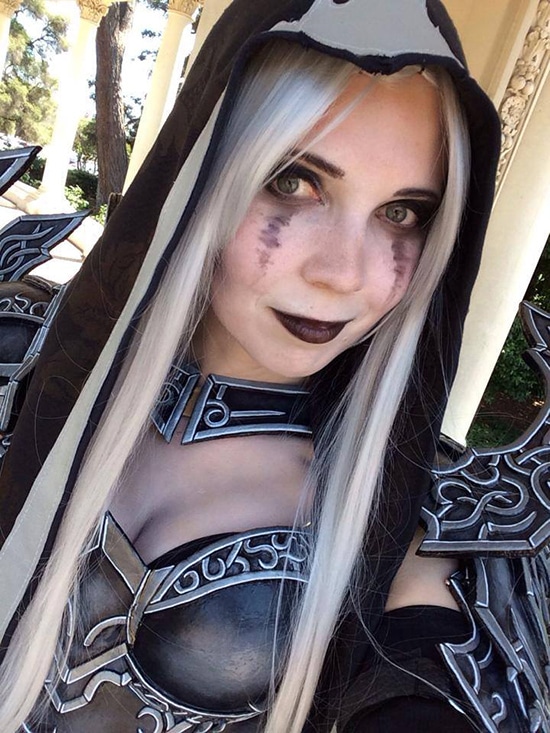 Thanks to Benni, Darshelle Stevens and Zim Killgore we had a great photo shoot later after the convention and got some nice shots of the costume. Our audience was an art class at the location and they even started drawing me during our photo session, ha ha! 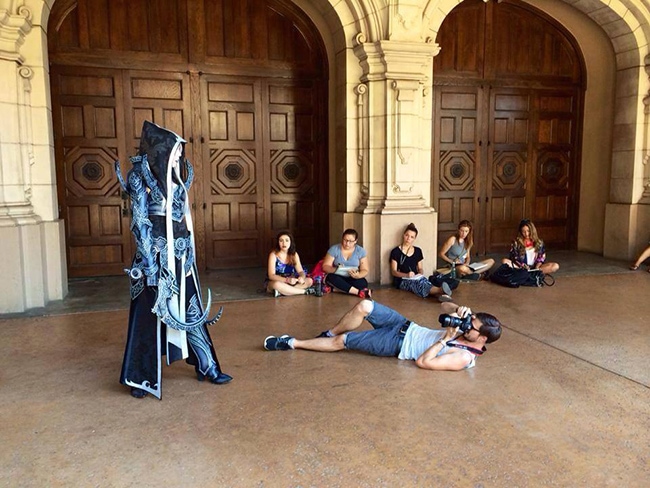 I like the costume overall, but since it was such a rushed job, there were too many things I wasn’t satisfied with and wanted to fix later. So far I wore Malthael only once and I really hope I get a further change to feature this costume someday. Zach Fischer’s artwork was so stunning, that it clearly deserves more exposure! :) 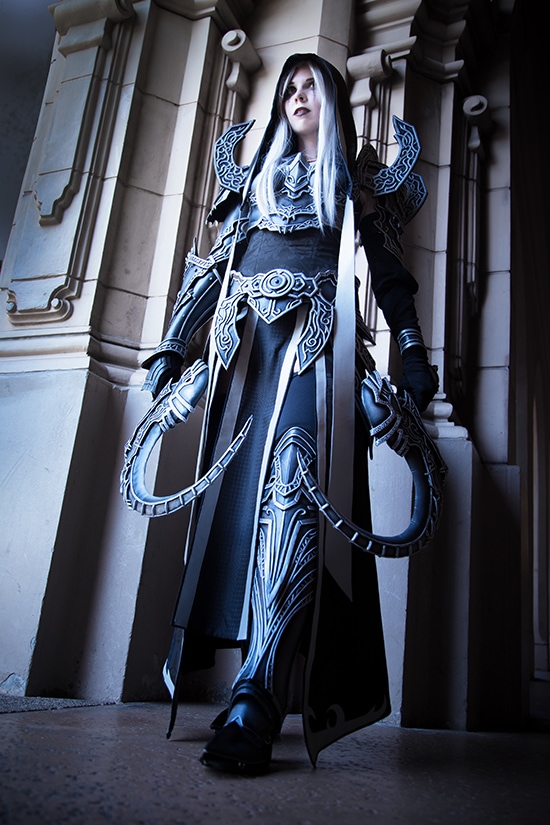 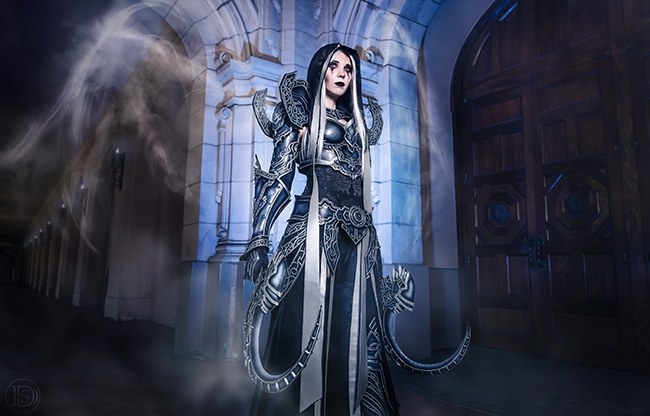 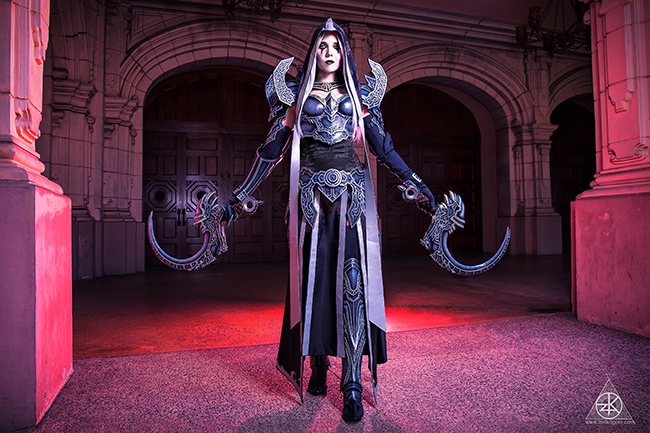