As a pretty obsessed Druid player (I already created 6 Druid Tier sets from World of Warcraft!), there was always no option for me to create a cosplay of a different class. However I admit that I always had the wonderful artwork of Wei Wang in mind. Well, and then the day came, when I was not able to see any more robes, any blue spike ears and any bodypainting. It was a day when I changed my class! 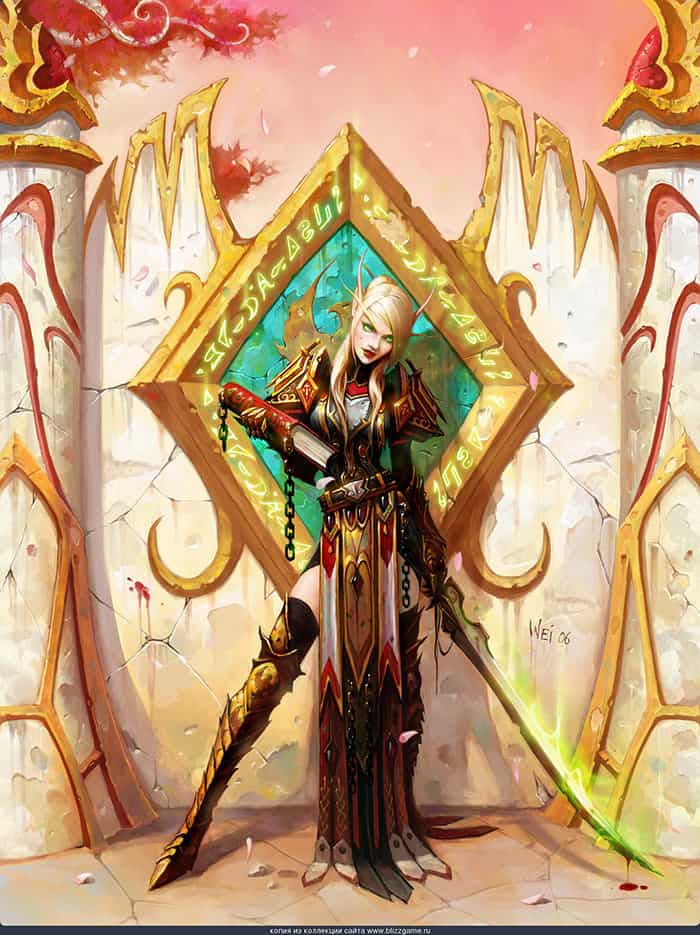 But yes, Wei Wang aka Glowei made it pretty easy for me to change my mind an to try something new. I not only loved the design of the Paladin Judgement armor, I also really linked the very femine but powerful Bloodelfs a lot. And I just finally wanted to create a pretty German costume finally: A costume in Germany’s flag colours black, red and gold, ha ha!

First step of my project was to build some of the biggest armor parts, the shin armor. Since they consisted of so many different parts, it was anything  but easy to make them perfectly fitting. But after I’ve created a good pattern for the armor, I justed shaped the pieces directly on my legs and was ready to add the details. In my Twitter feed and on my Twitch channel you’ll find more photos and videos how I’ve worked. 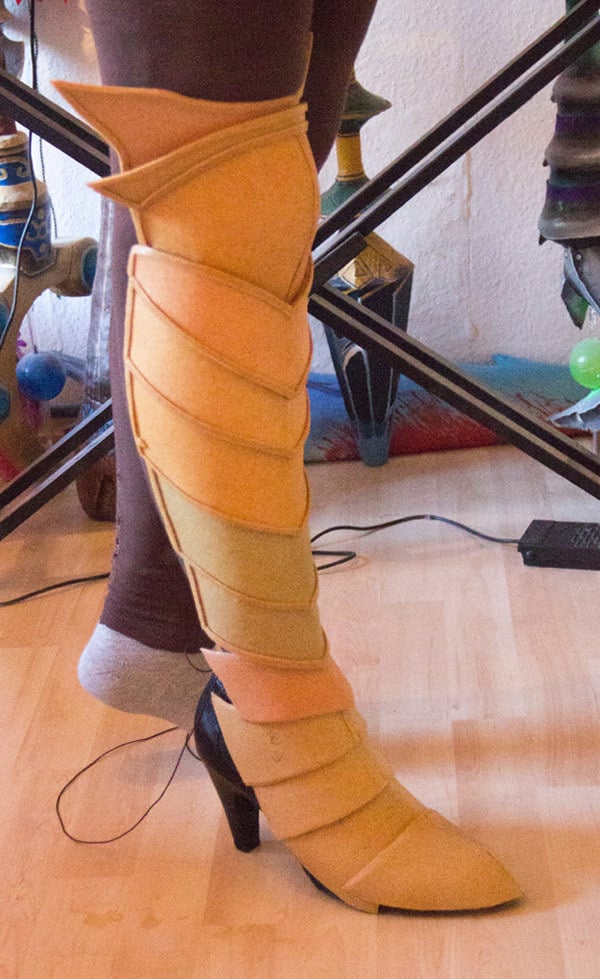 Since the shin and the shoe armor had so many pieces, it cost really a lot of Worbla (the material I use for my armor) to finish them. In total it took around 4 sheets of Worbla for the whole costume. Luckely I always have some sheets of this material at home, so I’m always able to keep on working without any forced break. However if you plan to build an armor for yourself you can calculate the amound of material just by following the image below: Create your armor patters like in this Youtube tutorial before you’ll start and then multiply those patterns by a bit more than twice. 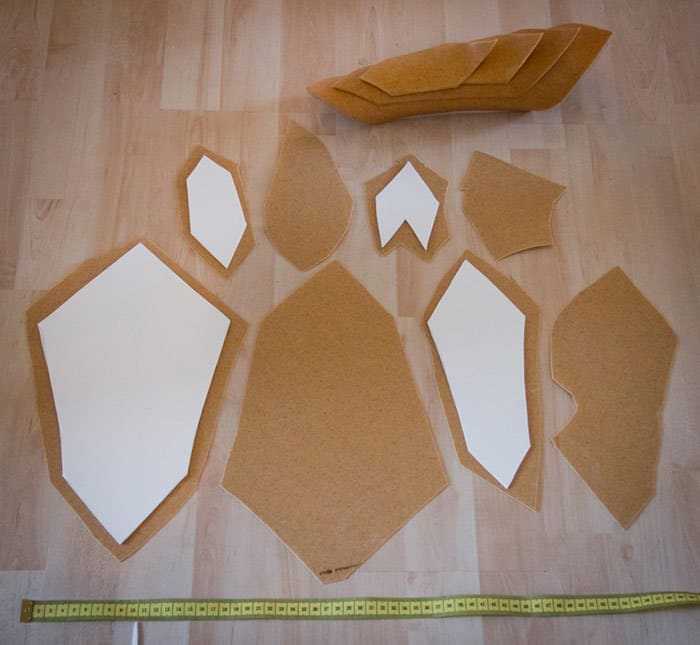 As you can see, it also took some material to add the final details to the armor. Since the reference was not completely clear, I choose to add my own personal touch to the costume and not just to follow the reference blindly. So I’ve designed several shapes of the phoenix (which is also used a lot for Bloodelf designs) and added them on different parts of the armor. 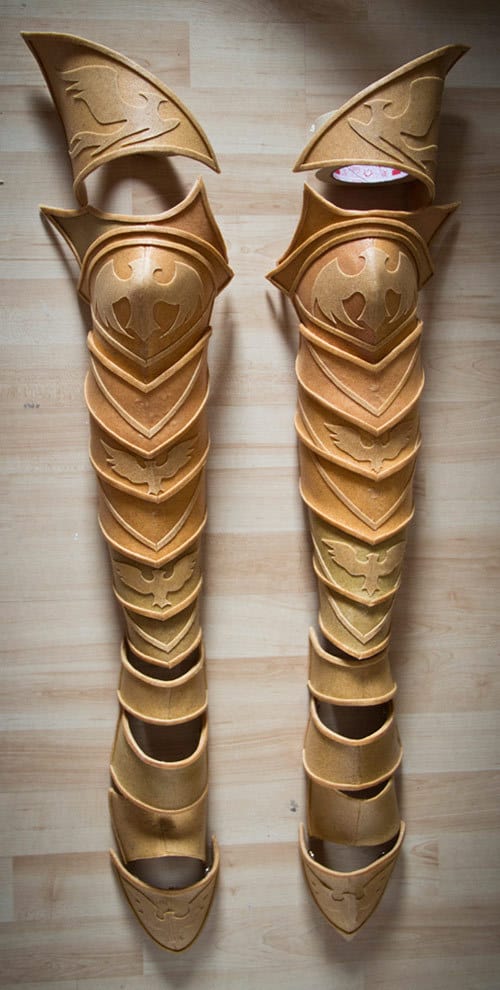 The final paint job was pretty simple, but I tried to give the armor not only a nice, shiny look, but also an antique and noble one. As always I’ve used simple acrylics for this work step.

Now it was time for the complicated part. Since building the shin armor was pretty easy, the pauldrons were really a challenge. In the past I’ve worked a lot with styrofoam and expanding foam, but all these materials were not durable enough and pretty breakable. This time I wanted to make something very solid and which I’m still able to wear in 10 years. So after a few experiments I’ve decided to use Worbla also for this costume part. To get the basic form of the pauldrons I used a piece of foam which I’ve used a cast. In the detailed progress history on Facebook you’ll find all the different steps. 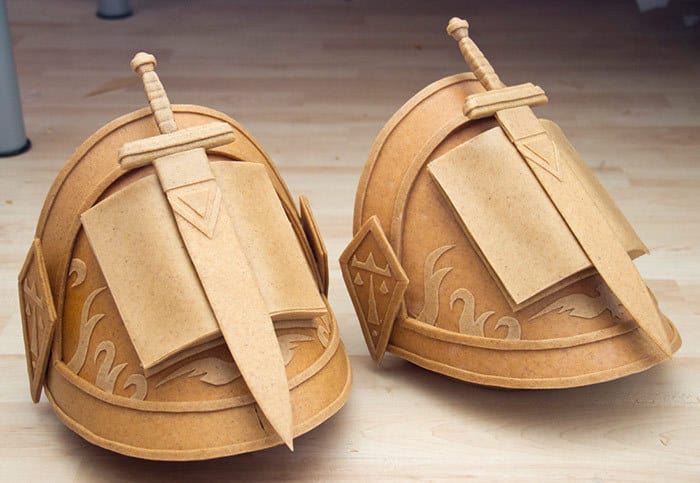 At the end I was really satisfied with the final shape, but especially the paint job made them something really nice. 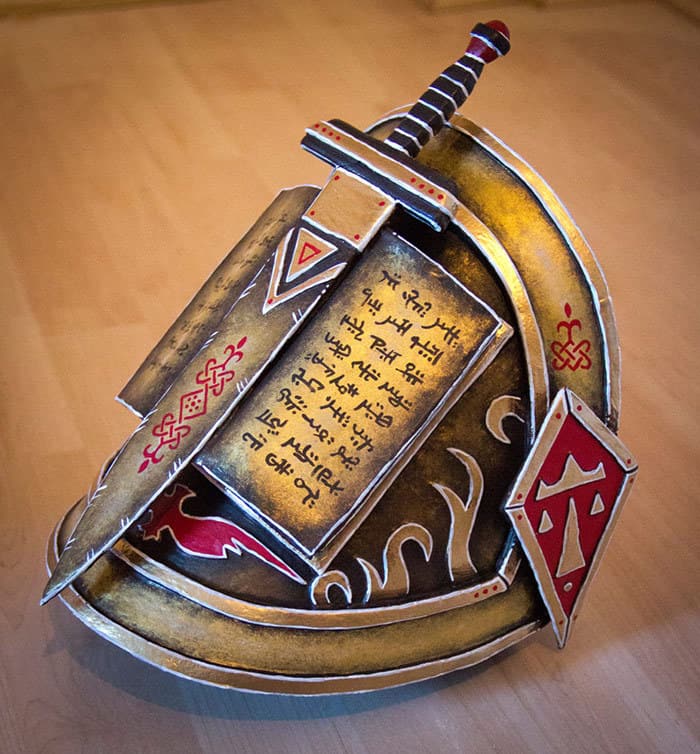 At the end only the fabric part was left and then it was time really to go crazy will all the shiny stuff! Since the reference was so blurry and unclear I added again some own ideas and a personal touch but always tried follow to the idea of Wei’s artwork. 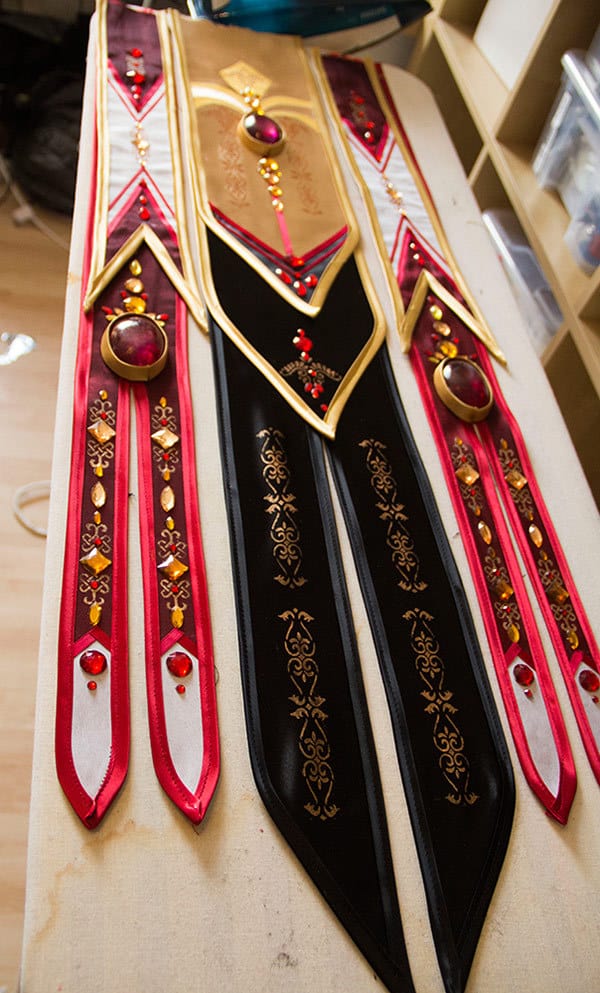 Well… and then it was time to put the costume together. Moments like this are always very exciting for me and especially the first minutes in the costume are just awesome. 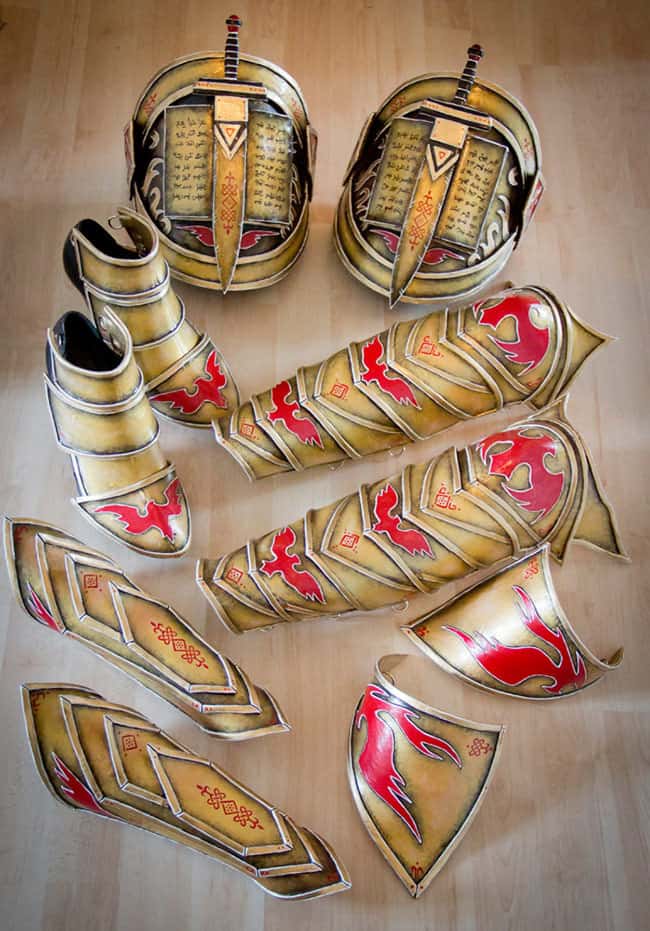 Now it was time for the weapon. I really had a lot of ideas in mind and especially Ashbringer didn’t want to leave me alone. However I always want to create something new, something nobody saw before and since Ashbringer was already brought to life by the Chris White, costume contest winner of Blizzcon 2011, I decided to go with Halbert of Smiting.

In the past also the most of my props were made of breakable foam and paper mache, but after I’ve changed my technique for my pauldrons already, it was no question to do the same for the polearm. As you can see, I used foam as a base like most of the time, but this time I’ve worked with Worbla and putty to make it as durable and solid as possible. In addition it’s really easy to add details with Worbla and so it took only three days to build the piece and three additional to paint it. 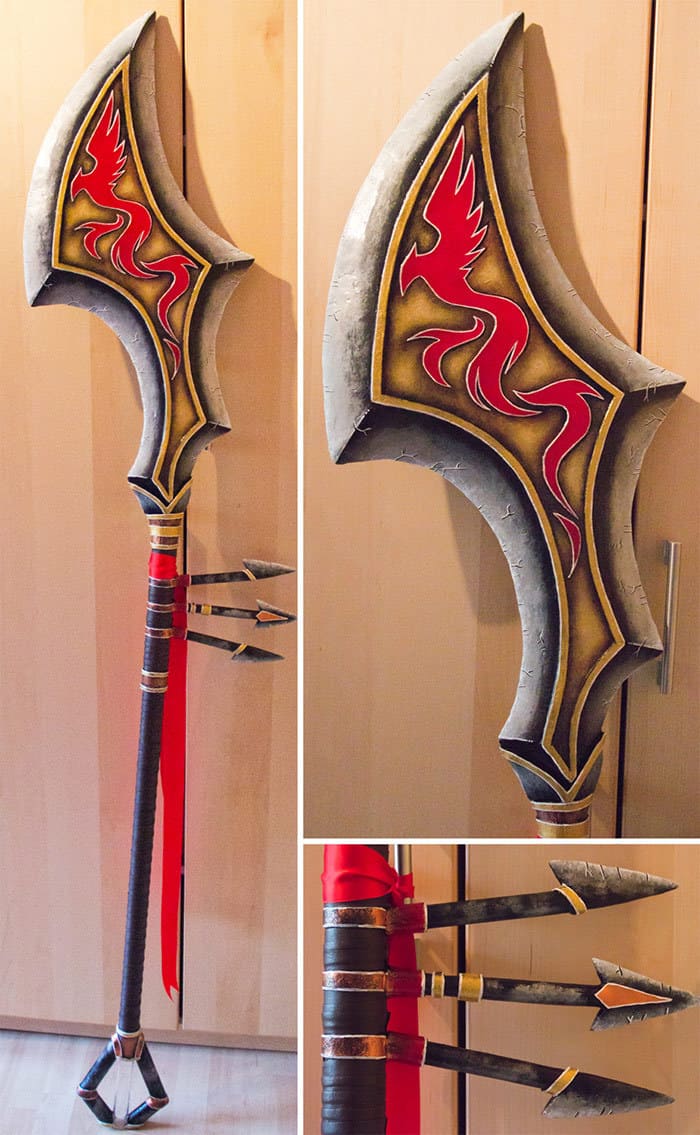 Well… and after a long search for a good location, it was finally time for the photoshoot. Luckely my own hometown Nuremberg had a building which looked excactly like the Scarlet Monastery. In addition my photographers from Hemlep Fotografie made an amazing job and since I was in charge for the photo editing I had even more fun to bring my Paladin to life. 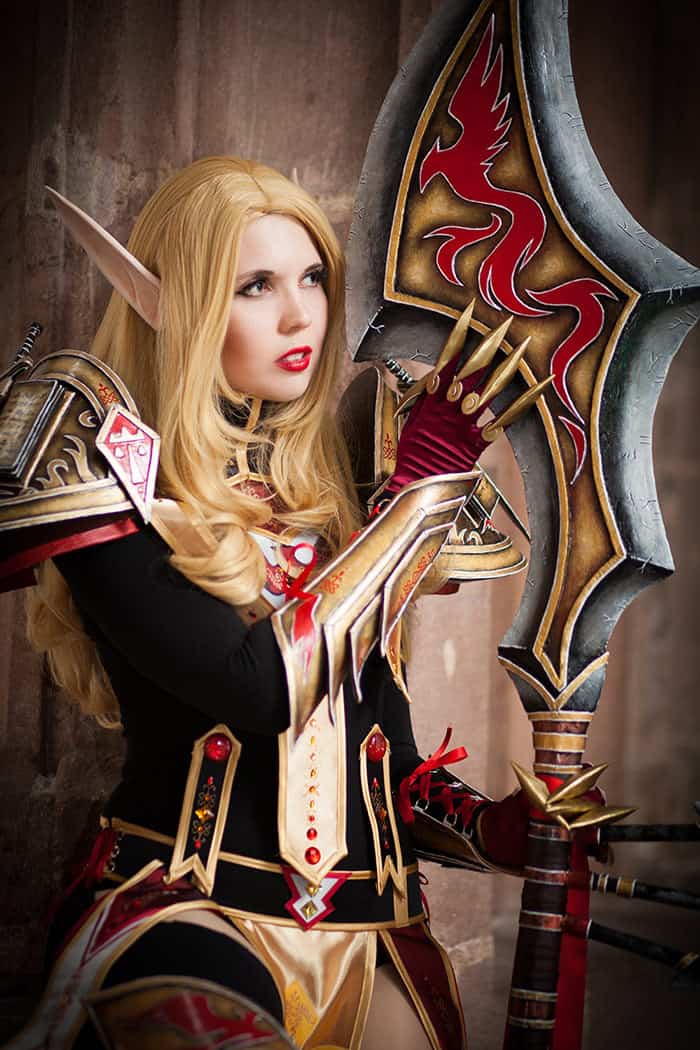 Well, and that’s all so far! I really hope you like the result of this project and I’m already looking foward to show you my next one! See you soon again!

And if you want to read the full story of the Paladin and follow my current projects just check out my Facebook progress page!