The Wizard – An Adventure with Intel and Newegg
Published on Dec 3, 2013

In the summer of 2013 something exciting happened: The companies Intel and Newegg.com asked me for a commission! And it was not only any commission, it was a Wizard from Diablo III for their booth at Blizzcon. It was excited and the chance I always waited for and dreamed of and finally it was there and suddenly one of the biggest challenges in my cosplay career was waiting for me! 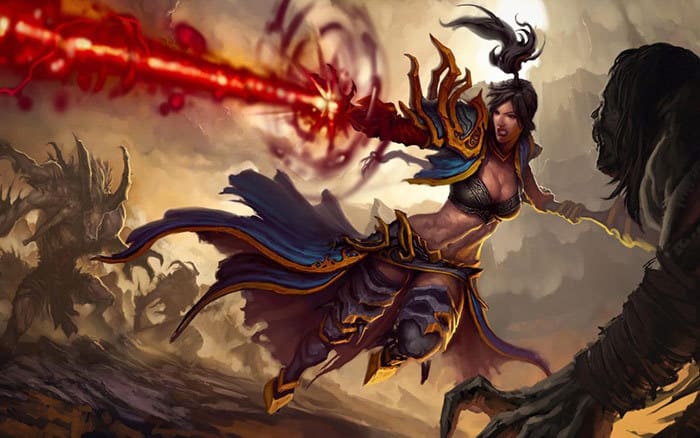 In fact the design of the Wizard wasn’t anything then hard to bring to life. It was also not a huge complicated costume, but this time I had to create a costume for somebody else. It would be maybe no problem if I would be able to work with measurrements or my model would have a similar body shape and size as me, but Joanne’s body had nothing to do with my amazon like shape. In addition while I live in Germany, Joanne waited in California for her costume and so I had no opportunity to do any fitting tests during this project. In total I had a fixed date with my commissioner at which I’ve got the chance to adjust the costume, but at this point there is never an option really to change something huge. So… I had to work perfectly only by sight and just hoped everything will fit. The biggest challenge at this point was clearly the breastplate. After getting some measurements I’ve adjusted my dress form, made some patterns which fits usually to me a bit smaller and started building the first costume parts. From this point on my project was mainly based on hope, ha ha!

Like always Worbla was the main material for this armor. As you can see, the breastplate had a pretty simple form at the beginning and only got some details for it’s final look. Despite of that I really like the result and I guess, you don’t need to do something big and complicated for getting a cool piece. The same worked also for this huge pauldron. While it was not that easy to find a pattern for it’s base and cost a lot of experimenting, the details and these spiky things were pretty quickly done. At this stage I also already added my own touch into the project since I prefer to create costumes in a way I and my costumer like and don’t want just to get a excact copy of an excisting referece. In addition it’s just much more fun to work with more freedom.

In total there were not that many armor parts I had to build, but there was always the question if the costume will fit to the model at the end. 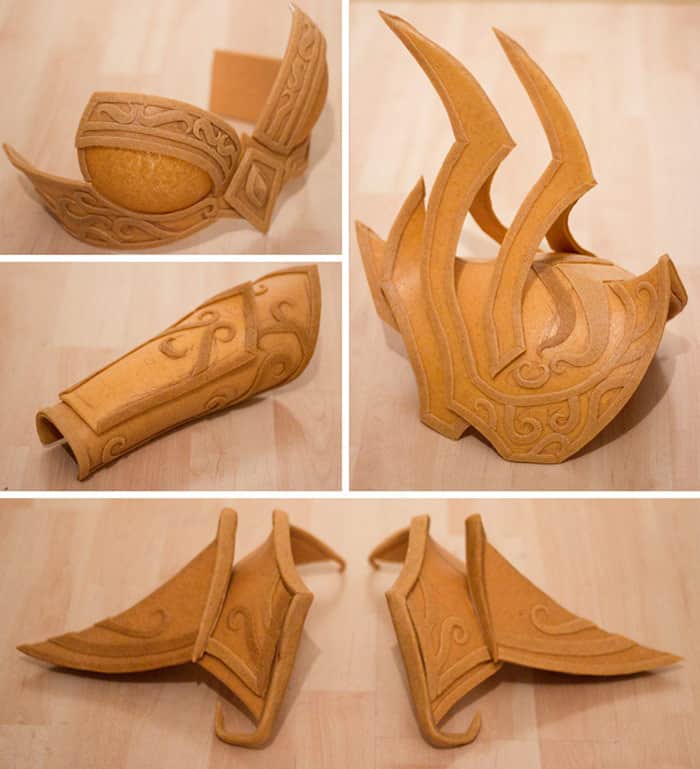 The upper leg armor was a bit more complicated, since it was necessary to create a sculpted like structure on it. To achieve that goal I’ve used EVA foam mats, carved them into the right shape and covered them with Worbla. The result was still pretty lightweight, but also huge and massive. 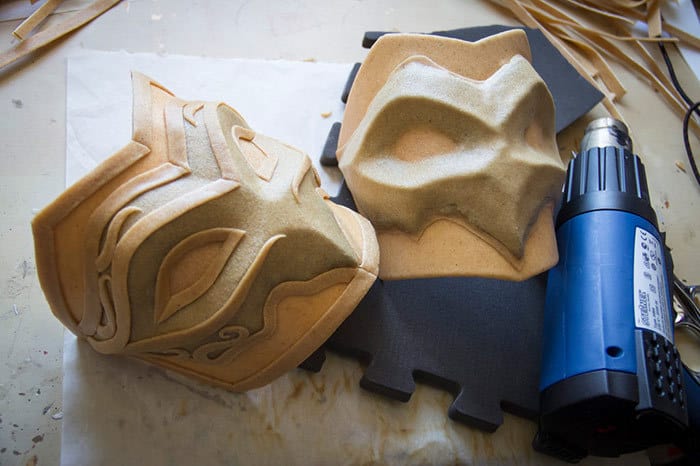 Well, and then the sewing started. Sadly I’m not a tailor and am much more specialized in armor and props. So I really appreciated it that the costume had only a few and pretty simple parts which I had to put together at the sewing machine. 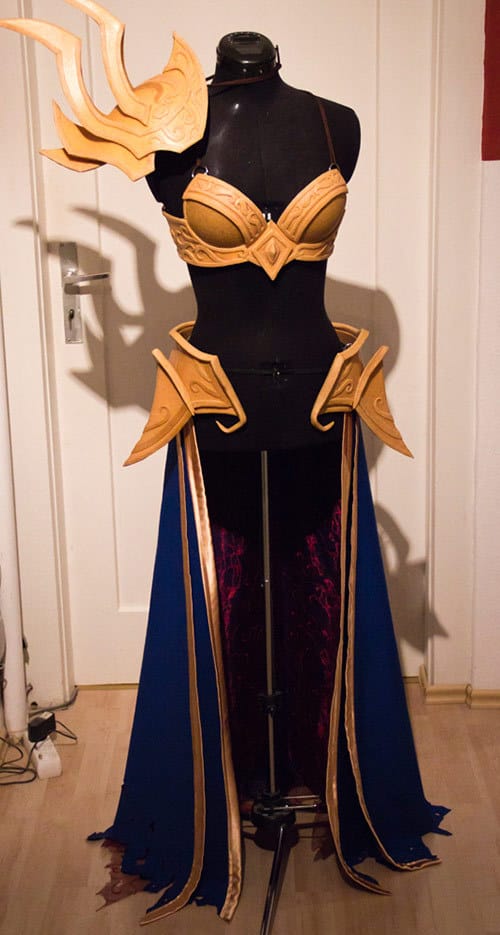 Well, and when I needed a break because my sewing machine annoyed me just too much it was time to paint a bit. After I’ve covered each of the armor piece with around 7 layers of wood glue, I’ve used an golden spray paint as a basic and added further colors and shadows. 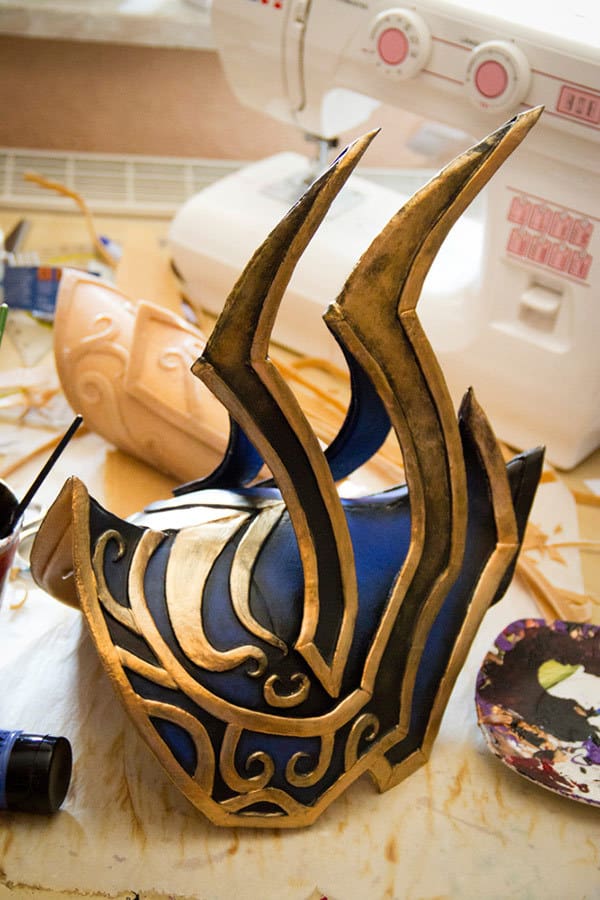 Since my fingers are always shaking like crazy my husband Benni was then in charge for the white highlights at the borders. I know these lines have nothing to do with an realistic costume design, but I really like this cartoonish look wish gives the armor just much more shine than it really has. It maybe looks a bit weird close, but from distance you won’t miss any detail with these technique. 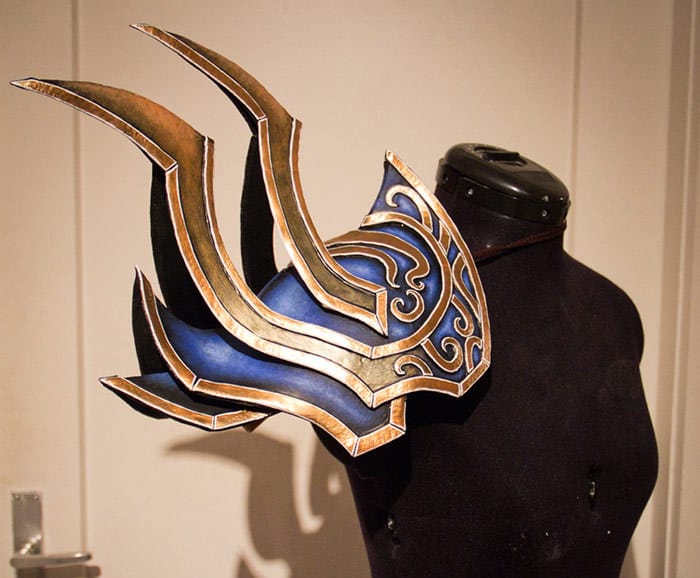 Gold/bronze and blue was always one of my favorite color combination and after the Protoss Wizard it was pretty cool also to use it for the Wizard. I just love, how strong the blue shines and how antique and mystical the gold/bronze looks. 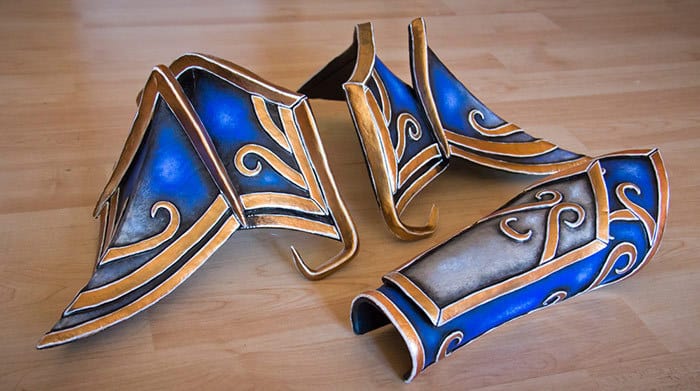 In total the paint job takes always around 50 % of time of the whole costume progress. Over the time I became really fast in building, but painting is something where I still need practise and which just takes time, no matter how much experience you always have. I also already thought about using air brush, but I admit, I just like this hand painted, rough and unperfect look. I like it if brush strokes are still visible, if there are small mistakes everywhere and if it looks cartoonish und unrealistic. 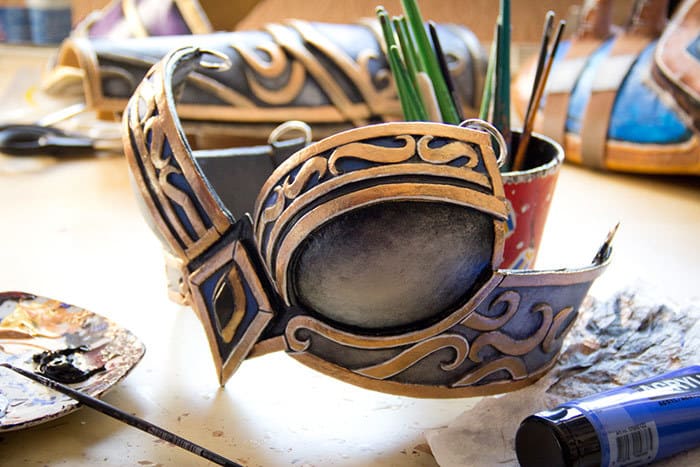 Oh well, and did I already noticed that I just love this color combination? 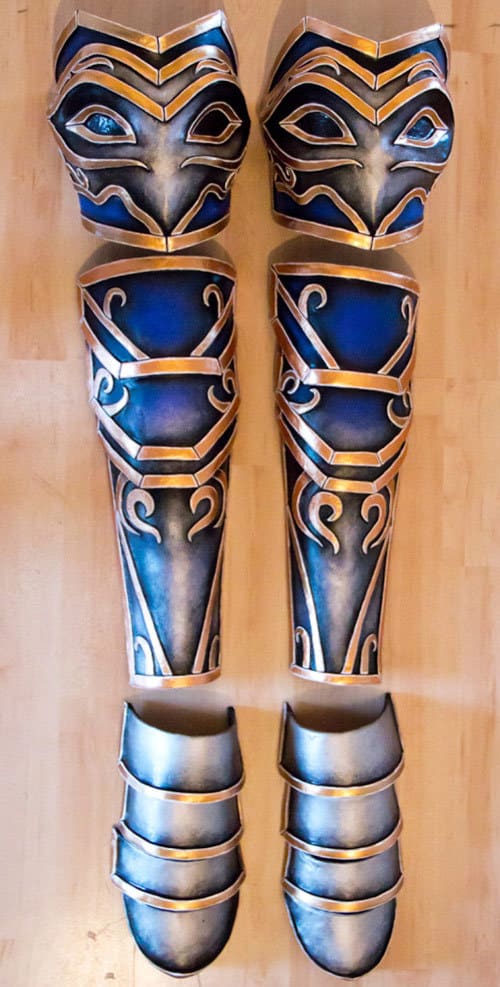 After I’ve finished the whole fabric and armor part it was finally time to put everything together. I admit, it was a bit tricky, to fix the pauldron since it had to “hover” over the shoulder and was anything than small, but with a smaller mini-pauldron inside the real armor also this part was solved pretty fast. The hip armor got also a thick belt later and was then attached with some strings and D rings to it.

You maybe already noticed, that the reference I had was kind of blurry and the staff was not really visible . At the one side it’s always super hard to work with an non-existing reference, at the other side I really love just to follow my imagination and create something completely free. Regarding to the Wizard I thought it would be a good idea to keep the curly ornaments of the previous armor parts and just transform it to a glowing blue orb. As you may see in the line in the middle picture this orb was orginally an acrylic ball, which I painted with blue glas paint and build and LEDs in. Since my customer wanted to get something really cool, I decided to sculp a dragon with some glowing eyes on the top of that ball. The form of the dragon was really simple since it got only a pair of wings, but it really took some time to sculpt the head and especially this uncountable amount of scales. 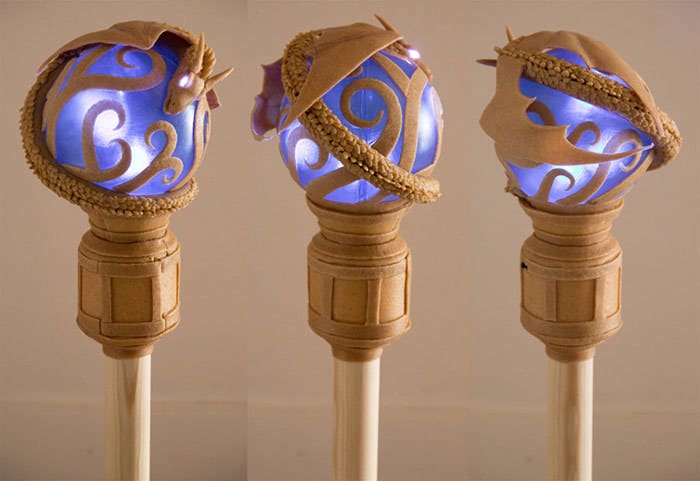 Do you also notice this small black dot directly under the end of the dragon’s tail? That’s the spot for the switch and also were the battery was hidden. I’ve attached a 9V batterly inside this thick part of the staff and build a case around it  afterwards. Now the “door” locked with a magnet directly over the battery and provides a very simple and fast change of the power source if the battery is low. 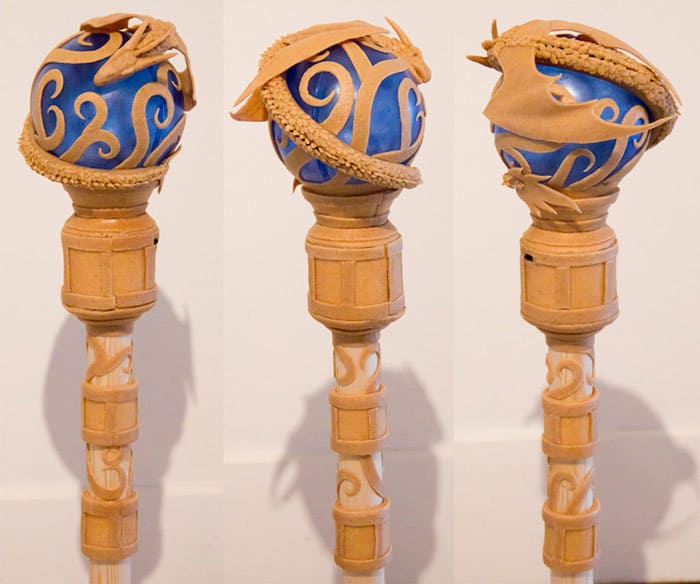 The final paint job took a bit since the huge amount of details, but with the helping hand of my husband even this part was done after one day. And since this was the very first prop which I created completely by following my own design it was pretty cool to see this piece at first in my mind and then bring into real life. 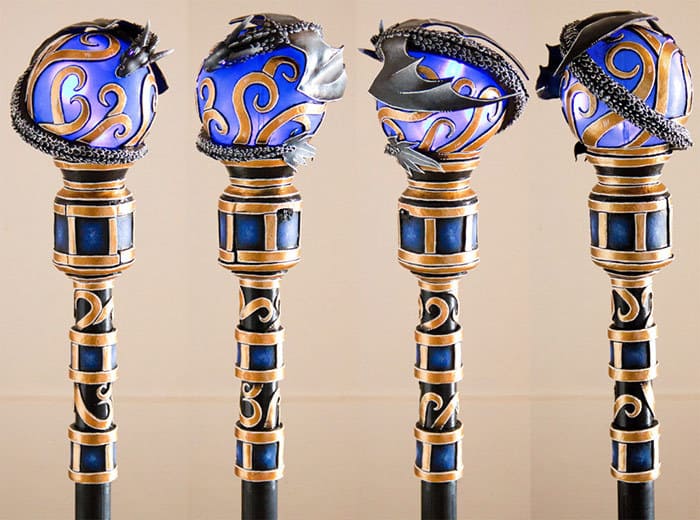 Well, and here is the final result. Until the end of the project I just guessed about the size of the different armor pieces, had only photos and meassurements of my model. When I work on my own costumes I sit at one point only in underwear since I test and edit the costume again and again until it fits perfectly. This time there was only one testing and this was directly before the event the costume was made for. And surprisingly I invested only a few small adjustments until every strap, every belt and every ribbon was close and transformed Joanne Chiang into a magical Wizard from Diablo III. 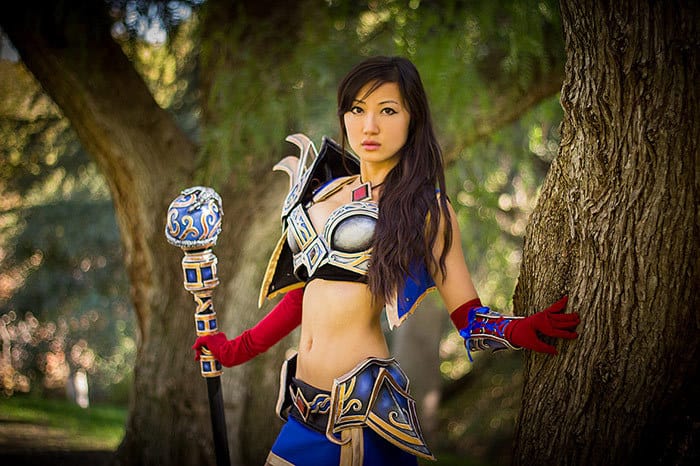 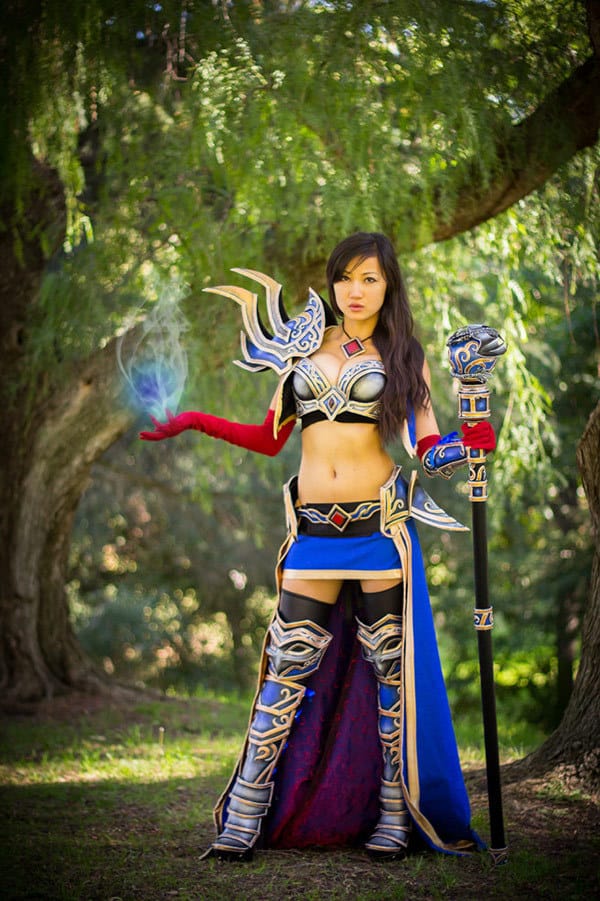 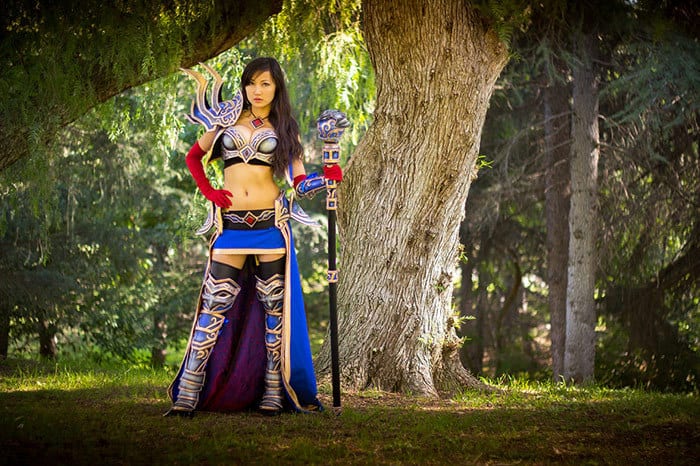 At this point I would like to thank my wonderful costumers Newegg.com and Intel for this amazing commission. It was a lot of fun to work on this project, which not only teached me a lot but was also a great experience in my carreer. In addition Joanne is a wonderful person and it was a huge pleasure to see my costume on such a gorgeous model! If you want to hear more about this project, check out my video interview at the studio of Newegg.com and at Blizzcon: