For a pretty long time Wonder Woman was a character I really wanted to realize but sadly I never found a design I fell in love with. Maybe it was a the lack of armor, but most of them were just too sexy for my taste. Then a friend of mine, the lovely Yaya Han visited me at home however and introduced me this amazing concept artwork of from the game “Injustice: Gods Among us” and it instantly happened – I HAD to cosplay her! The only problem was: I had only 1.5 weeks to finish this costume from the toe to the top! Comikaze Expo in Anaheim was just around the corner! 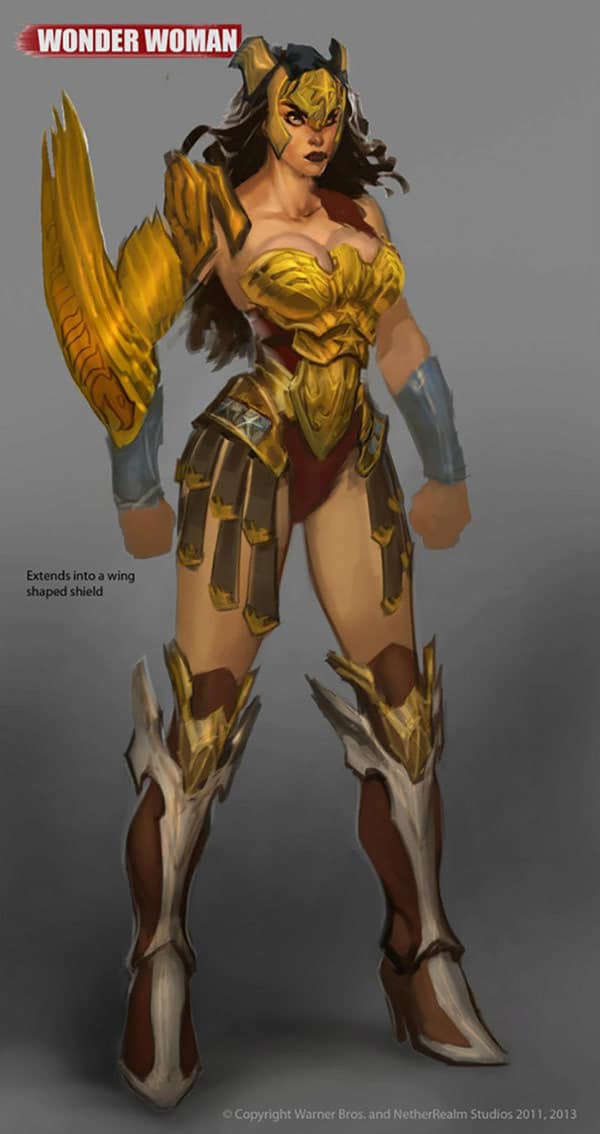 With an even bigger project running at the same time – my Deathknight commission for Intel and Newegg.com – I had to speed up from the beginning. Since I’ve worked with Worbla for over one year at this point and had many projects done before, I was able to rush like crazy without any mistakes or problems that needed solving. It’s all about experience! The more you work with a material and the more practice you collect, the easier it gets creating something with it. In comparison: When I’ve created my very first armor with Wonderflex I had massive problems, had to redo some pieces several times, was busy for over six months with this project and the result was flat and had almost no details. It’s all about practice.

So… in the middle of the night when the main parts of my Deathknight were done, I started with the shin armor for Wonder Woman. As always I build up everything on a very basic form of Worbla and just add more and more details afterwards. If you follow my page or my Facebook progress, you’ll know the drill by now. If you’re interested, you’ll also find the basic patterns for this piece in my Armor Pattern Collection. Also check out my armor tutorial book if you still didn’t! 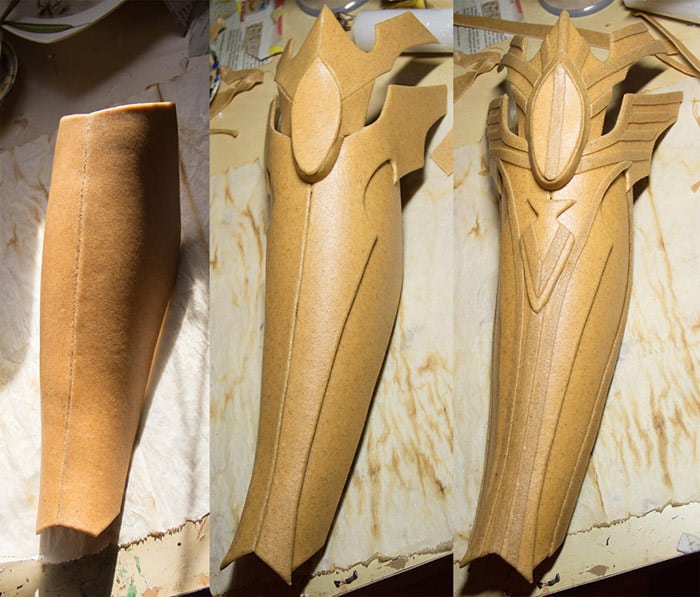 The breastplate followed pretty soon. It took some time until I added all the details symmetrically on every side and working with a reference that was this blurry was not easy, but honestly I enjoyed the freedom I had with this project. Just the pauldron thing was a little bit weird, but at this point I’ve noticed how great my followers are: One of them grabbed a 3D program and redesigned this armor piece for me. I had kind of an idea how I can build it, but his work was an awesome help and inspiration for the final construction. 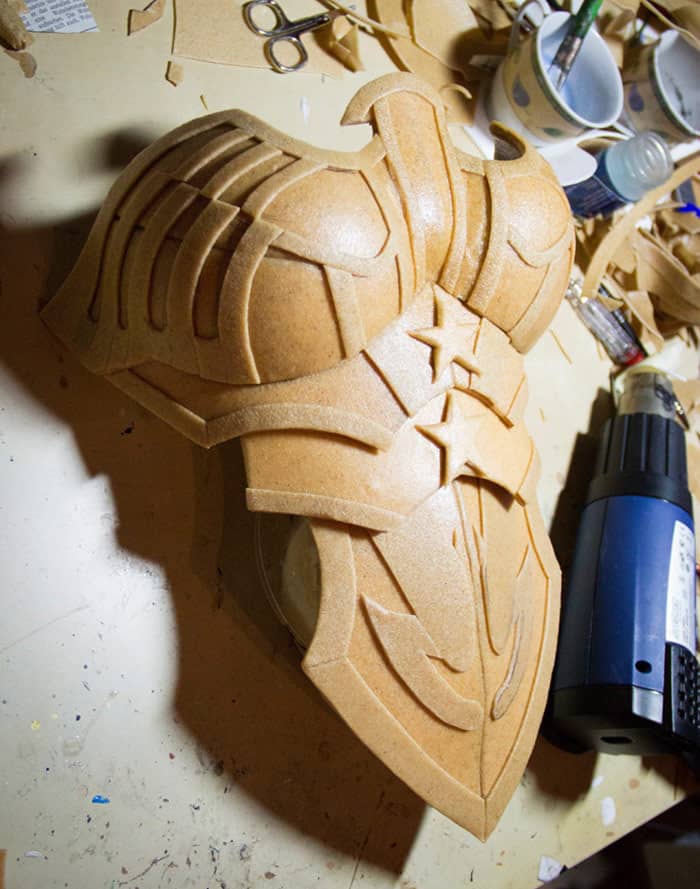 As you can see the construction of the remaining armor pieces was pretty simple. All parts were Worbla-craftfoam sandwiches with some easy details. And since the clock was ticking like crazy I was pretty thankful to have a “simpler” costume reference in front of me. 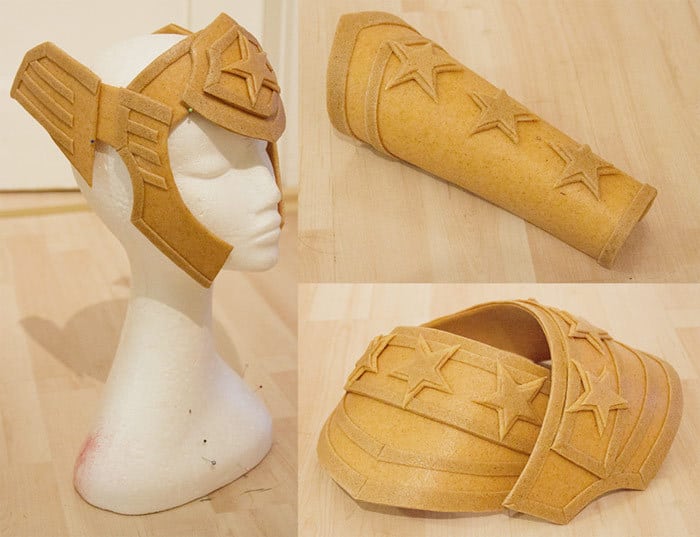 Then, in the middle of the night, just a few days before I had to leave for the states, the painting process started. With some Doctor Who (best highspeed cosplay progress keeping you awake TV show EVER!) on the screen my husband Benni and I spent the whole time with priming and painting. Since wood glue (or Elmer’s glue in the US) doesn’t need any additional sanding and can be dried pretty quickly with a hair dryer it was the perfect solution for this crazy cosplay stress. I basically finished all parts in just a few days and colored every piece one after the other. We worked like a conveyor belt! But that’s the best part of cosplay: At the end you have not only a cool costume, but also a story of sleepless nights, weird adventures and spontaneous panic attacks, ha ha! 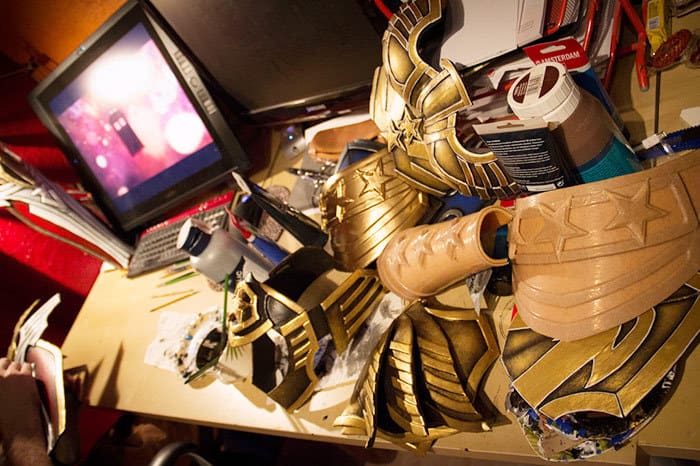 As you can see – even a simple build can turn out great with a nice paint job! And while I was taking care of the basic colors and shadows, Benni was in charge of the highlights and details. He is by my side for over ten years now and was there for me since the beginning of my cosplay career. Supporting me and my art in any way he can just came natural for him – be that helping me getting into my costumes, being a cosplay handler, taking photos, painting my armor or just being there in my hardest times. It’s just wonderful to have somebody like him on your side and I wish everybody would find such a lovely soulmate. 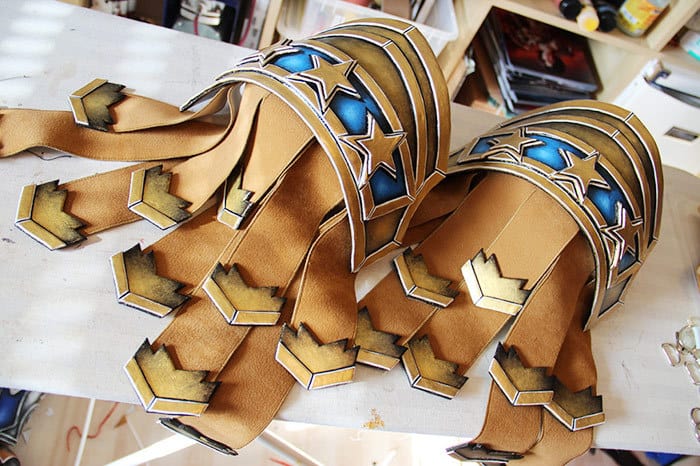 So just a few hours before my flight to LA all armor pieces were done. Sounds good, right? Well, sadly I still had to find out how to attach everything to my body – and even after solving this problem I would be naked under my armor! It was time to torture my sewing machine! I’m sadly not the best seamstress, but at least it was enough for a quick bodysuit, tights and arm sleeves. Wow, these last few hours were really an adventure! I remember sitting at my sewing machine half an hour before I squished the last piece of armor into my suitcase and then running to the airport! Also you don’t want to know how my seems looked like, but at least they held together! 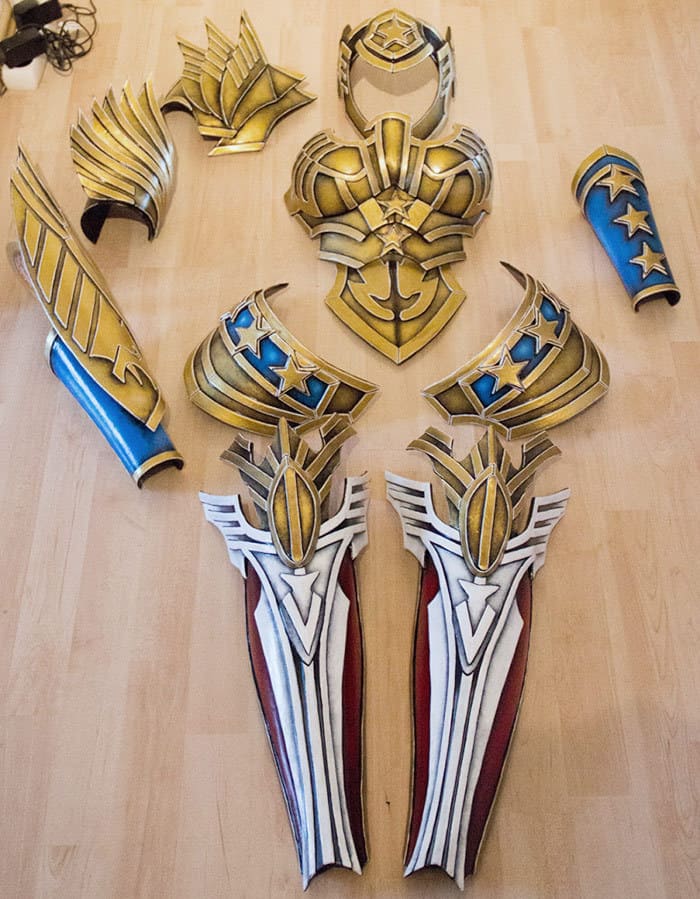 An almost one day long trip later it was time for Comikaze Expo! The costume freshly done and completely not worn at all, the first dress up was a huge test! Some of the attachments didn’t work like planned and I had a lot of troubles to fix it pretty fast. Also here and there some parts were hurting me or were not comfortable at all. My wig was a mess in combination with the helmet and my pauldrons just didn’t want to stay where they were supposed to. It was just crazy – but also like before every other convention, ha ha! After some hours however managed (somehow) to transform into Wonder Woman! AND: Two costumes in three weeks: done! I was so proud of us! It was a good day and the convention could start now! I was ready! 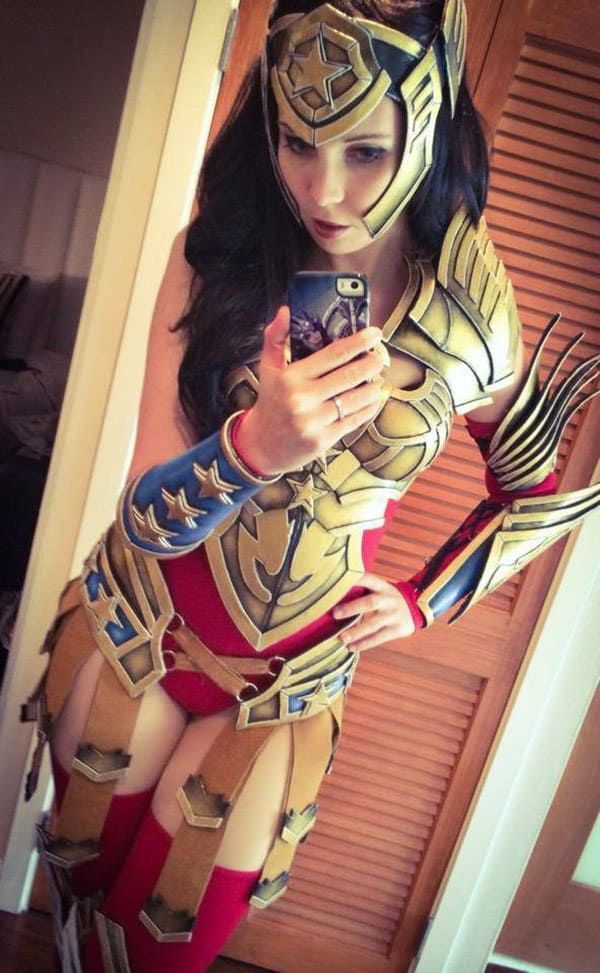 Comikaze Expo was great and my very first comic convention in the US! I was also pretty lucky to meet the very talented photographers Darshelle Stevens and Zim Killgore who did an amazing work during a photoshoot right the next day. As a huge fan of their work, it was a huge honor to collaborate with them. Especially since it’s super rare for me to work with anybody in the states since I’m from Germany. But do you remember this spot they found? It’s actually the place of one of the most epic fights in TV history!

Well, I thought this place would be just perfect for Wonder Woman! 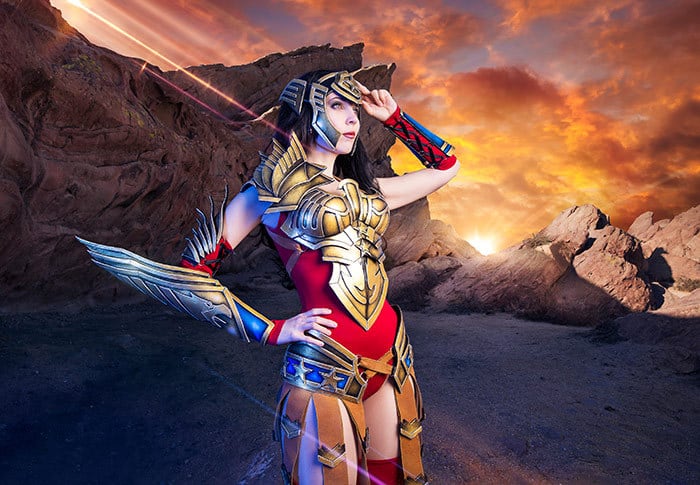 In addition Benni got the chance to do some quick shots pretty fast. We barely had any equipment, but our Canon 650 D and a simple 50mm 1.8 lens was enough, even if the result is nothing that can be compared to Darshelle’s and Zim’s work! 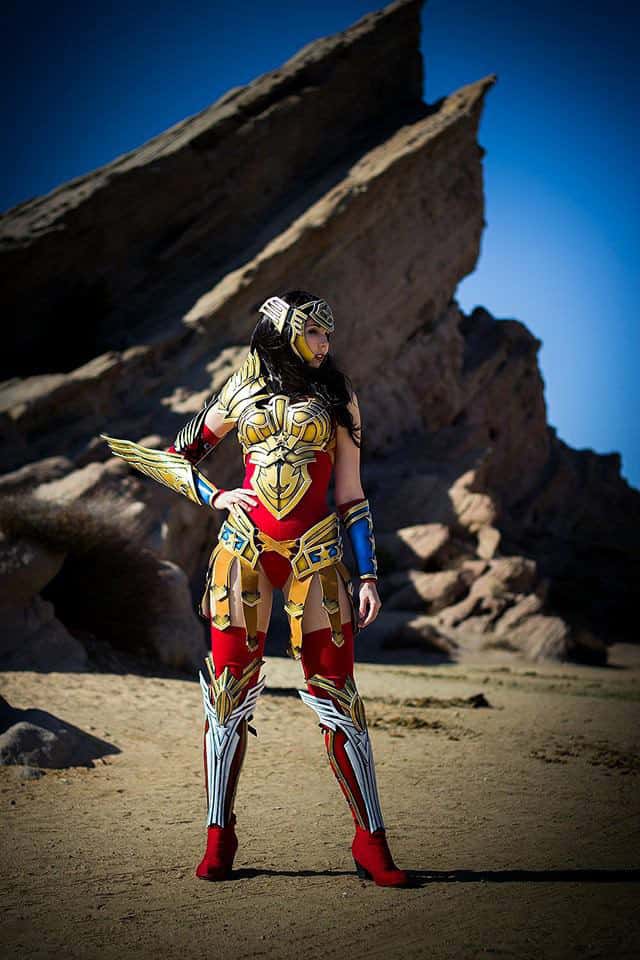 After my trip to LA I also luckily found some time for another photo-shoot. My photographer this time was the student Julia Krotzek who required some photos for her final exam. I love editing photos by my own and since she offered me these options and had a cool idea for a studio shoot, it was easy for me to dress up again. The result you see here was a shoot made with a dark blue background and a fog machine. And: a lot of Adobe Lightroom and Photoshop. I honestly enjoy editing photos as much as creating the costume. Dressing up is pretty cool, but as an artist who wants to bring a character to life a photo is my most favorite way to achive that. Not only because you’re able to get rid of all your imperfections, but mainly because you have control over the environment, lights, colors and effects. And it’s just super fun! 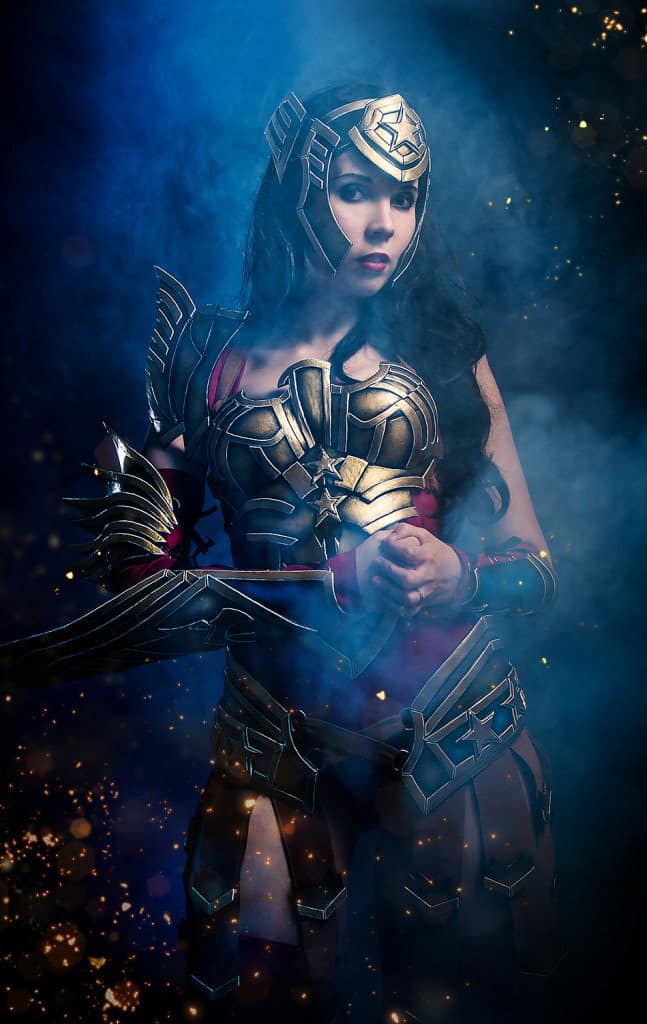 Well, and that’s all from Wonder Woman! I really hope you enjoyed the story behind this costume and I’m looking forward to share more with you soon again! Thanks for reading!