One of my bigger projects in 2014 was a Norn Warrior from Guild Wars 2. As somebody who easily falls in love with stunning designs, the Norn was a character race I wanted to bring to life right after I discovered this amazing armor set. It not only had this very special look I never saw before, but the female Norn was strong, wild and still very sexy. Exactly what I look for in my projects! 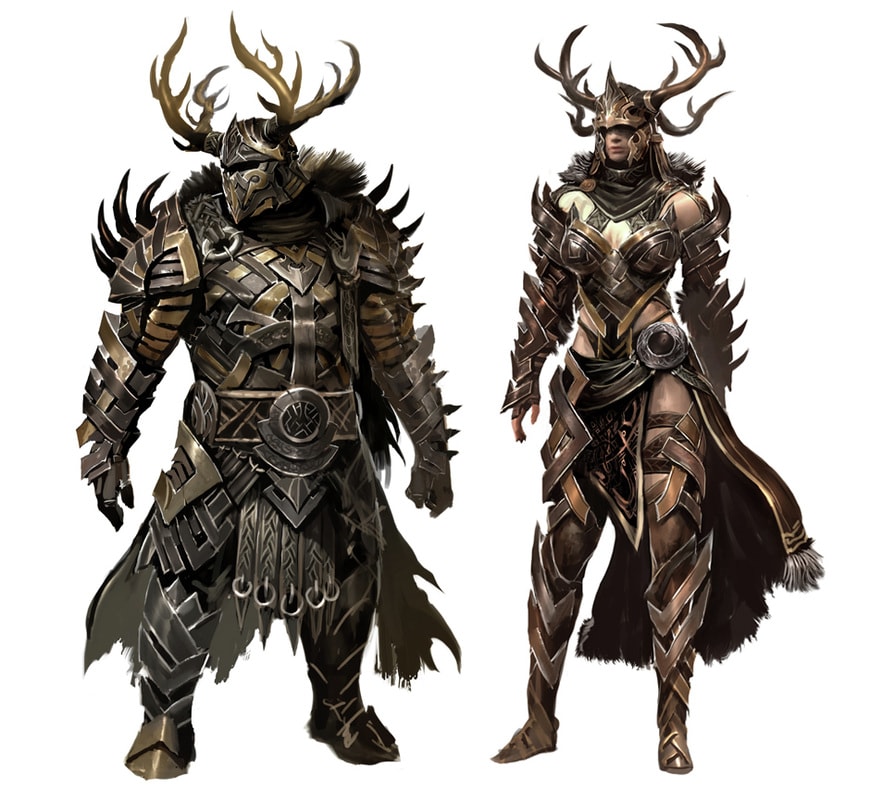 After I searched for more references I also found this breathtaking 3D rendering and all resistance futile. I ordered some Worbla, started patterning and swang both of my hot air guns for the next two weeks like crazy! 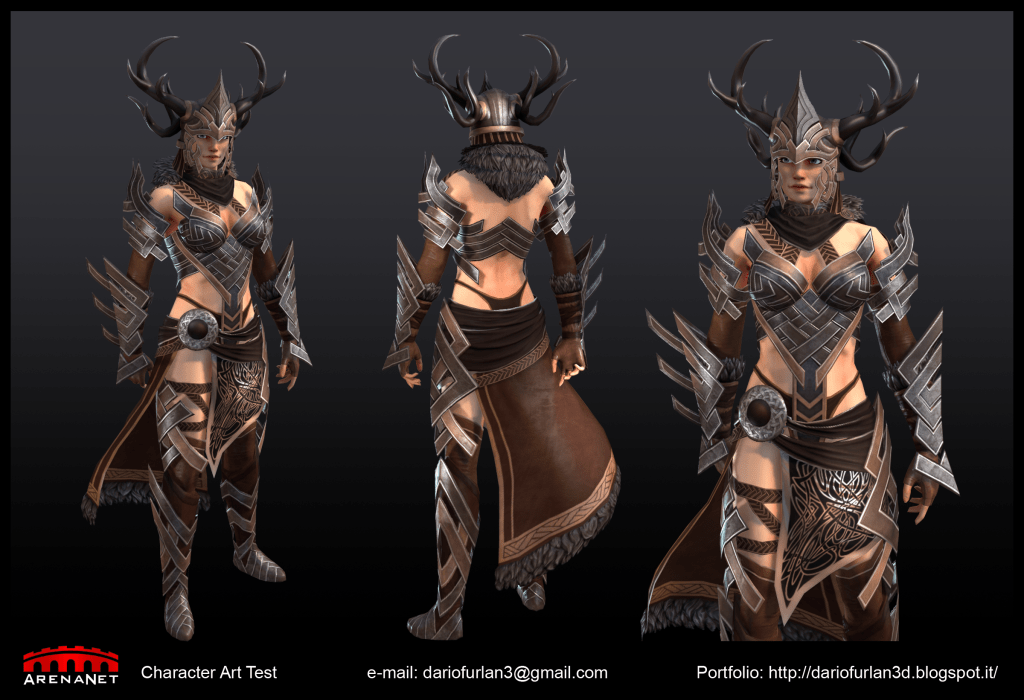 While I mostly just print out some basic armor patterns from my Pattern Collection, this costume required a lot of fresh creativity (which is good!). Pretty much every single armor part consisted out of geometric lines and squares, which turned out to be a huge crazy puzzle I had to solve at first. So this time I drew everything on newspaper and craft foam, cut and shaped everything and just hoped it would work in the end. In fact the first piece, the shin armor, took me a few tries and even the final form was still pretty weird and did not look very right. But at this point it’s important to keep on try and be patient. The upcoming pieces fit together much better and everything slowly went more smoothly. 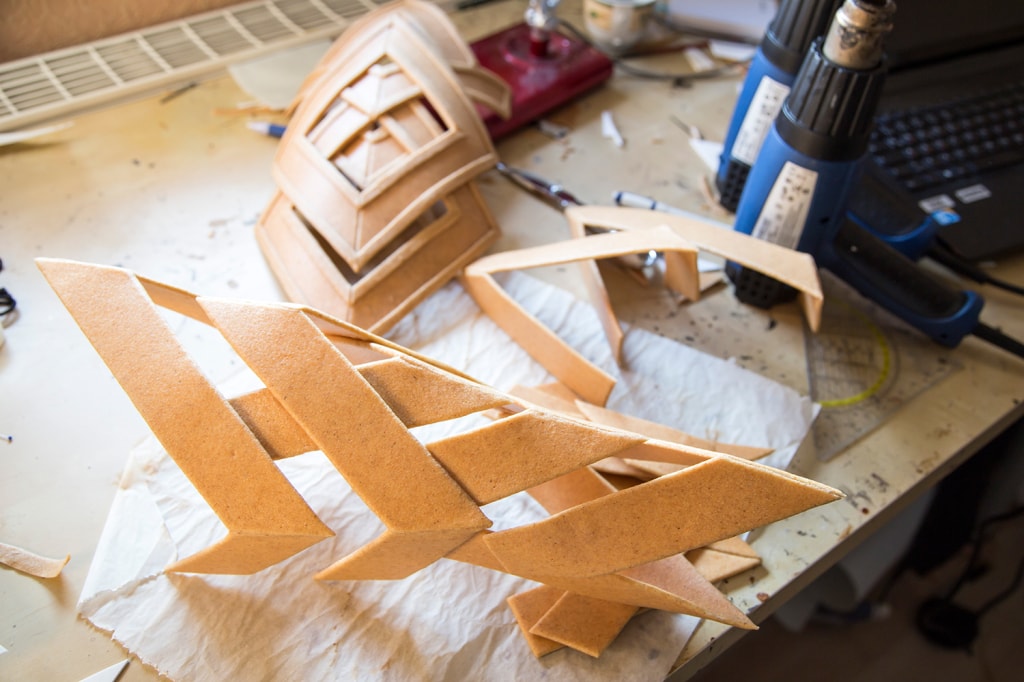 When it comes to constructions like that it’s pretty important to make notes and mark all the different pieces. Which I can tell you now, since I didn’t made a single note, ha ha! 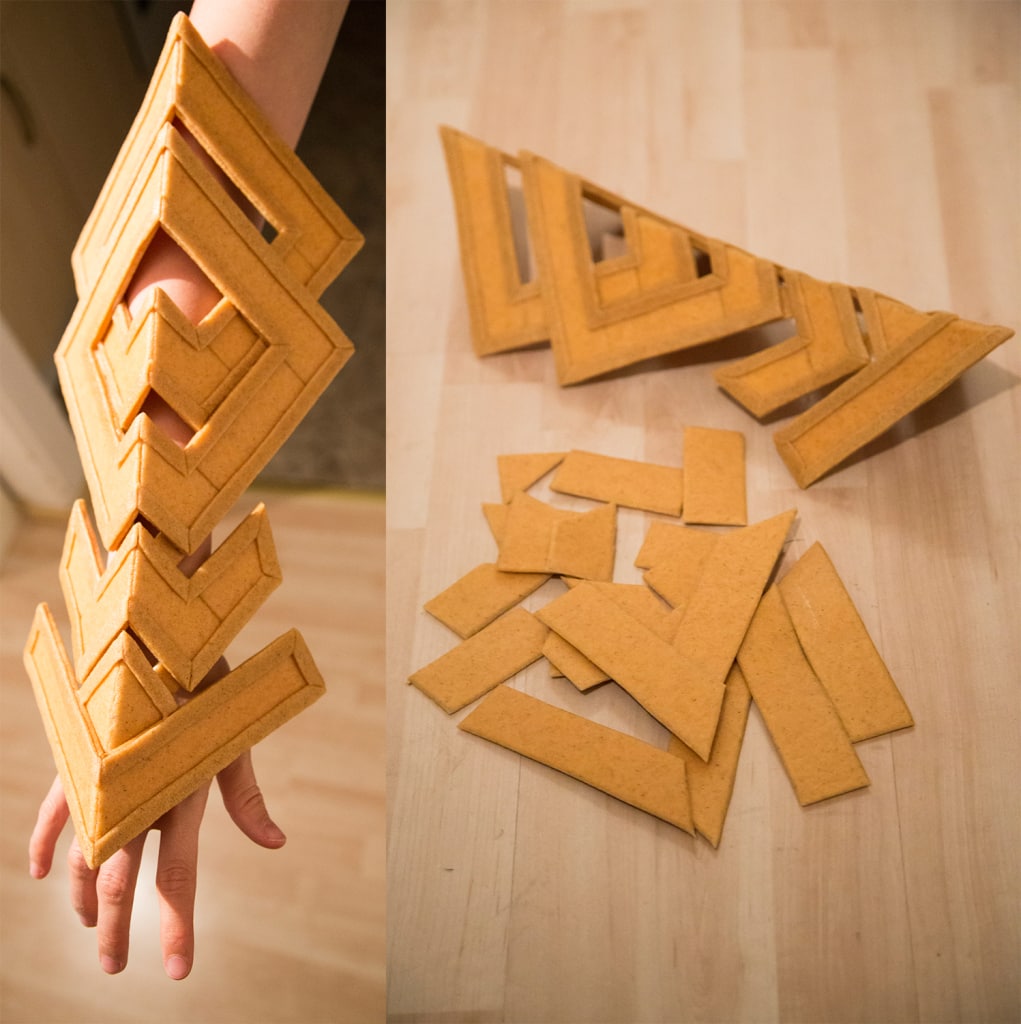 Also one of the main problems was dressing up: What’s the front, what’s the bottom and which piece belongs where? Or does this thing here looks like shin armor to you? I honestly had no idea what I built but I just hoped it would turn out well! I guess it’s like that when you start something really complicated. 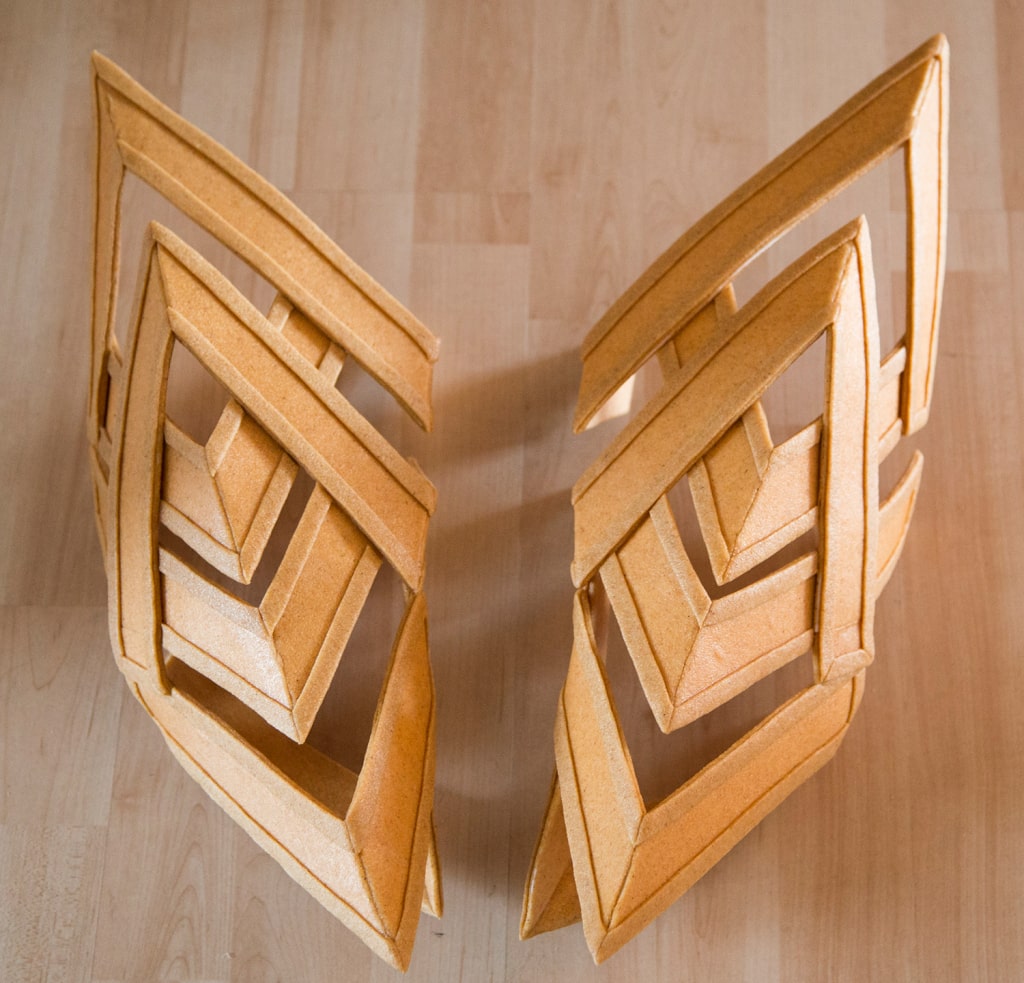 Also as you can see, this costume had pretty simple and few details. Just the basic build with meters and meters of Worbla trips on top. Once it came to this step, I usually take half of a Worbla sheet and prepare stripes for hours until I finally start with the detail work. This is sometimes a bit boring, but it’s more effective and faster if you streamline your work steps and get a routine in there. 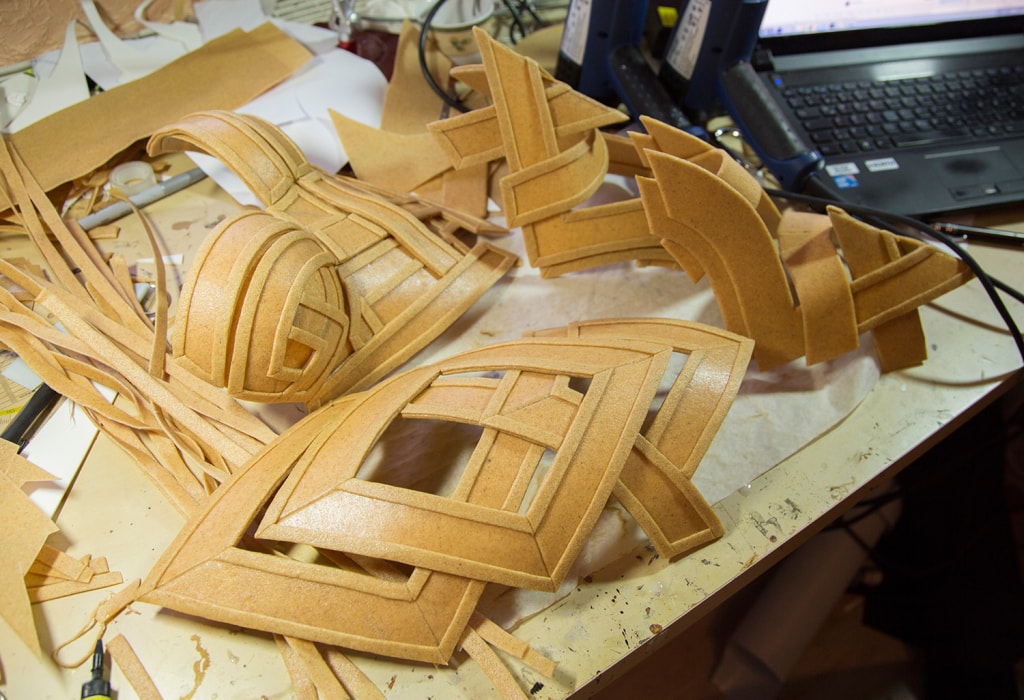 While I doubted the whole design would work in real life during the early construction phase, it finally felt right once I’ve adjusted a few finished parts on my dress-form. Everything finally found a shape, fit well together and especially had a good silhouette. I had only 2 weeks of time for this project and clearly had no time to redo the parts too often, so I was super excited that everything looked good so far. 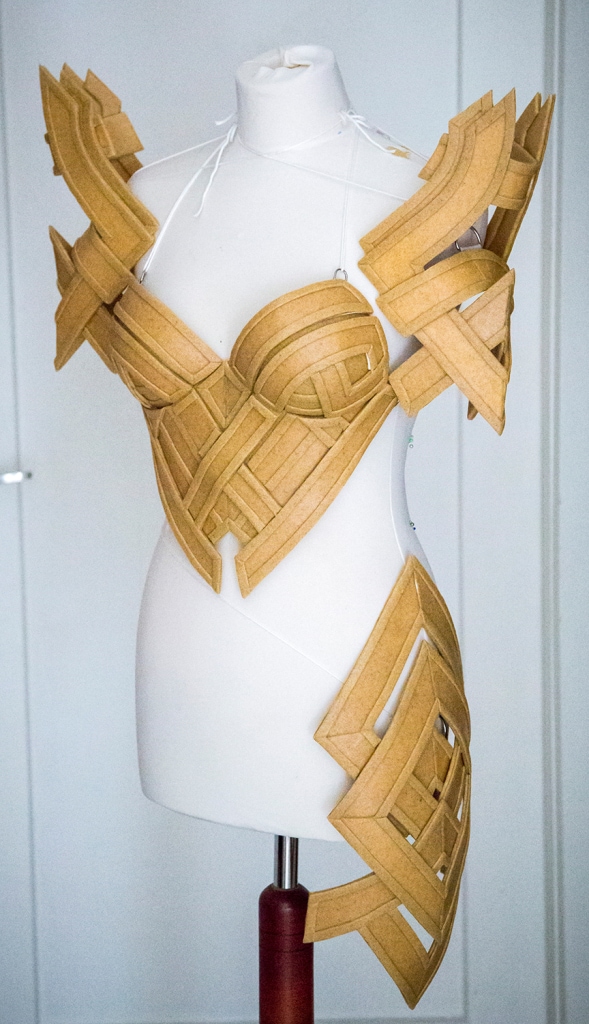 Like most of the time simple acrylics were good enough for the paint job. While I kept on working on the last parts and also the necessary prop, Benni was as always there to give my armor some color. Like explained in my Painting Book everything is painted with just a few basic colors (silver, bronze, gold and a few blacks and browns) by just dabbing the acrylics on. 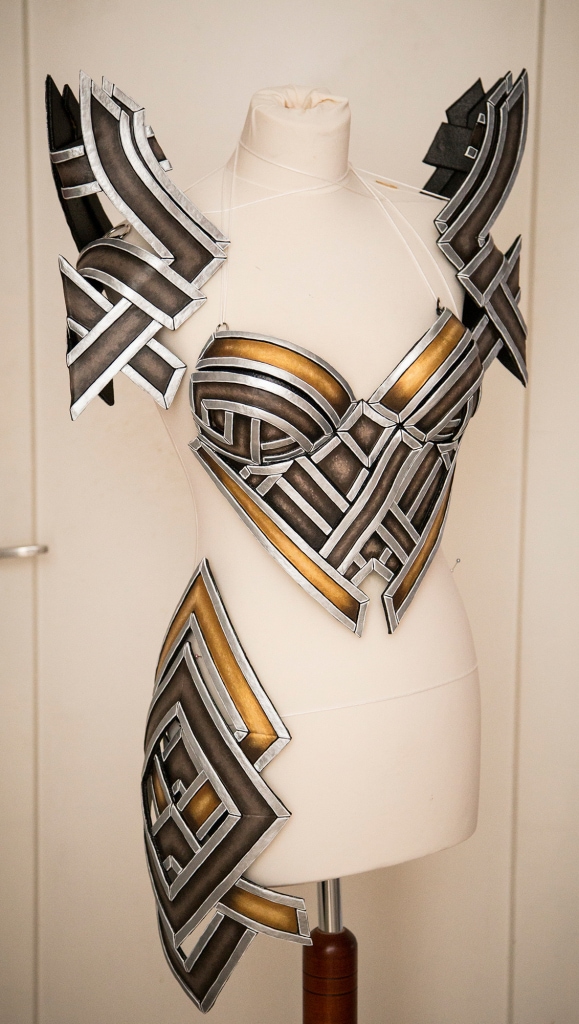 The helmet was one of the bigger challenges however, mainly because of its size and my goal to squish the whole thing into only one suitcase. So at first I printed out the helmet pattern from my Pattern Collection, copied them onto craft foam and covered everything with Worbla. My wig head was a great help to put everything together, even though it was still necessary to adjust it to my head to get a perfect fit at the end. 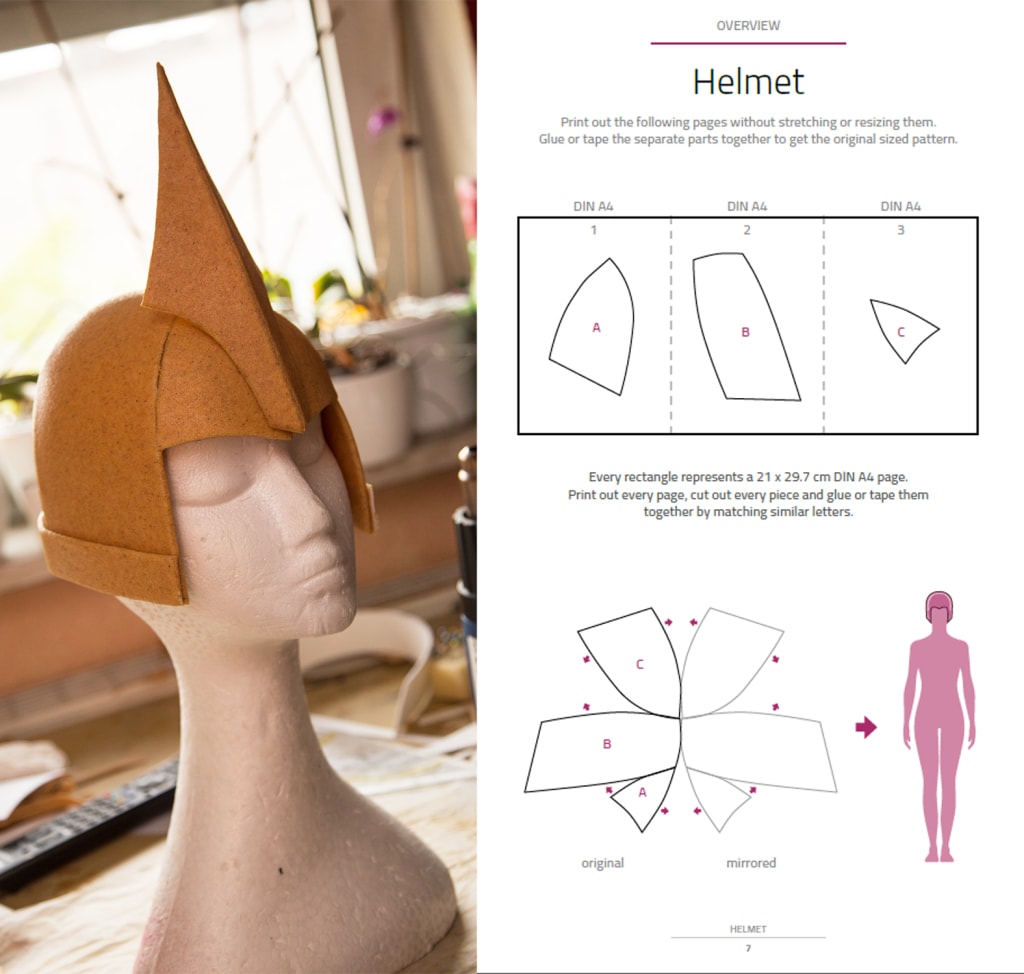 The additional horns turned out to be quite of an experiment. I wanted to make them as lightweight as possible but as the same time as solid as possible – plus I had to be able to detach them. So I mixed up a few materials. The base was made out a aluminum wire, covered with lightweight modeling clay and smoothed out with paper mache. Being still pretty fragile I covered the horns at the end with one layer of Worbla and sanded any rough edges down with my dremel. The final result was connected with a pair of screws to the helmet. So every time I want to travel I was now able to detach the antlers, squish them into the helmet and save a lot of space in my suitcase for the rest of the costume. Yay! 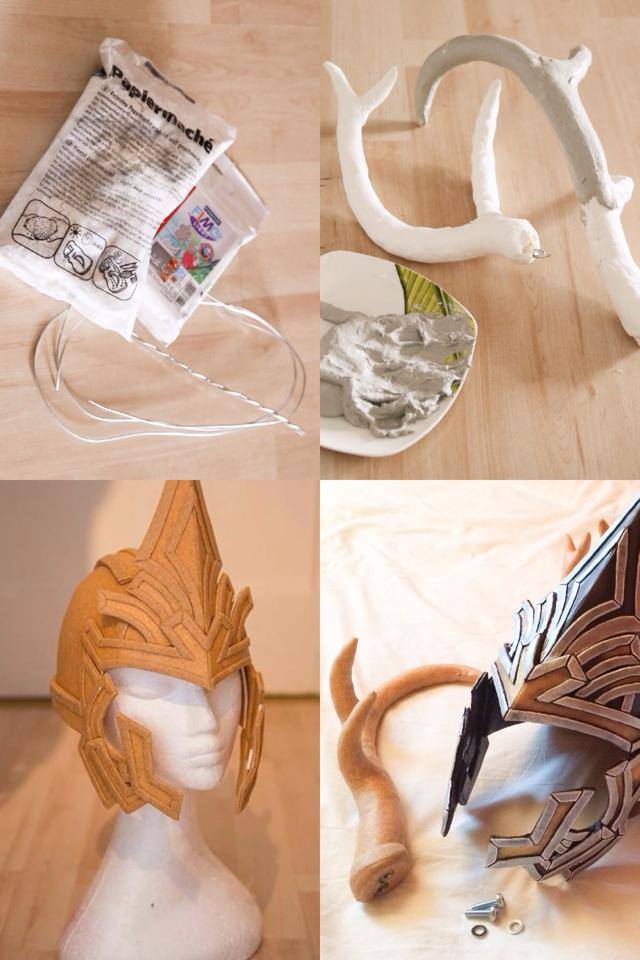 That was the final helmet! 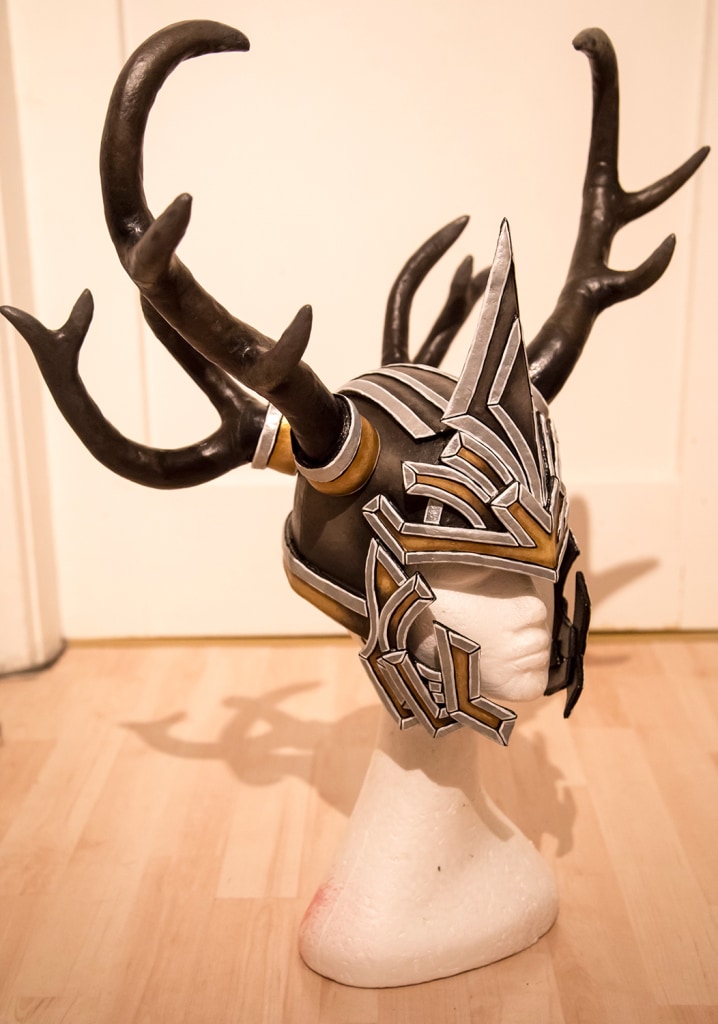 And while Benni was busy with painting, I did another fitting test. This time I added all the fabric parts and other details. The fur is surely faux fur and the skirt part was hand painted over hours by Benni as well but this time with fabric paint. For me it looks completely identical to the reference, while he went totally crazy since he drew some few lines the wrong direction, ha ha! It drove him crazy! I still was not able to find out which lines he was speaking about! 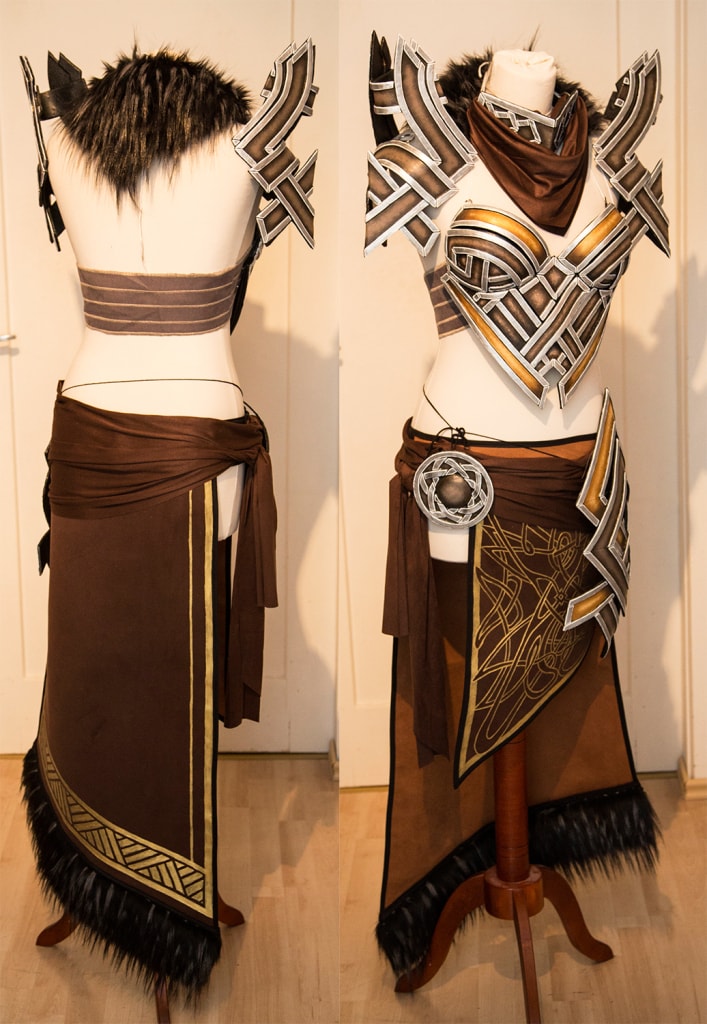 Now it was time for my sword. Actually I thought for a pretty long time about which sword model I would choose from the game and especially tried to figure out which one I can break apart best. My final decision resulted in a tiny detail of a greatsword I found after some digging: Since I tried to figure out how to break down a giant blade it was a great help to use a model in which the blade is wrapped in belts to hide the gap between two blade parts. See what I mean? 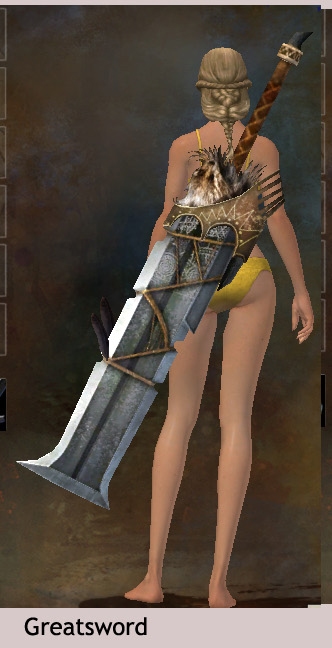 Starting with the sword I used a wooden staff as the base connected with two types of screws that fit into each other. Since EVA foam is easy to cut and carve I used this material as the base for the blade and covered the whole construction with Worbla afterwards to make it would be more solid and durable. So at the end I had three pieces I just had to screw together to transport even this monster in one of my 82cm small suitcases. 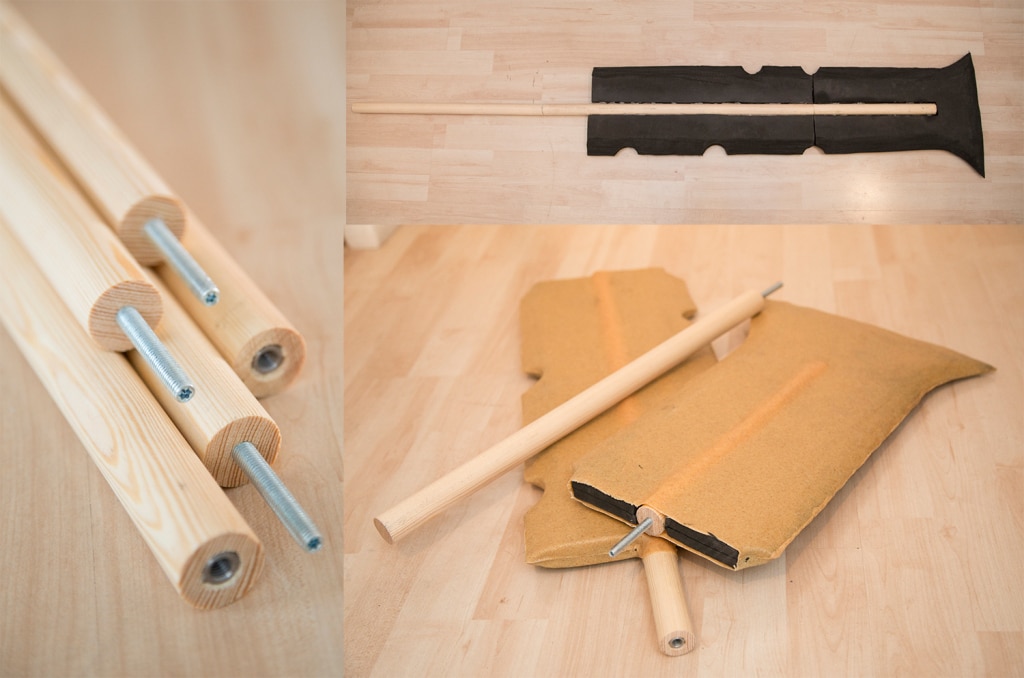 And as you can see, everything fits together perfectly! However it still cost me a lot of space in my suitcase – and I had to squish a full armor set in as well! 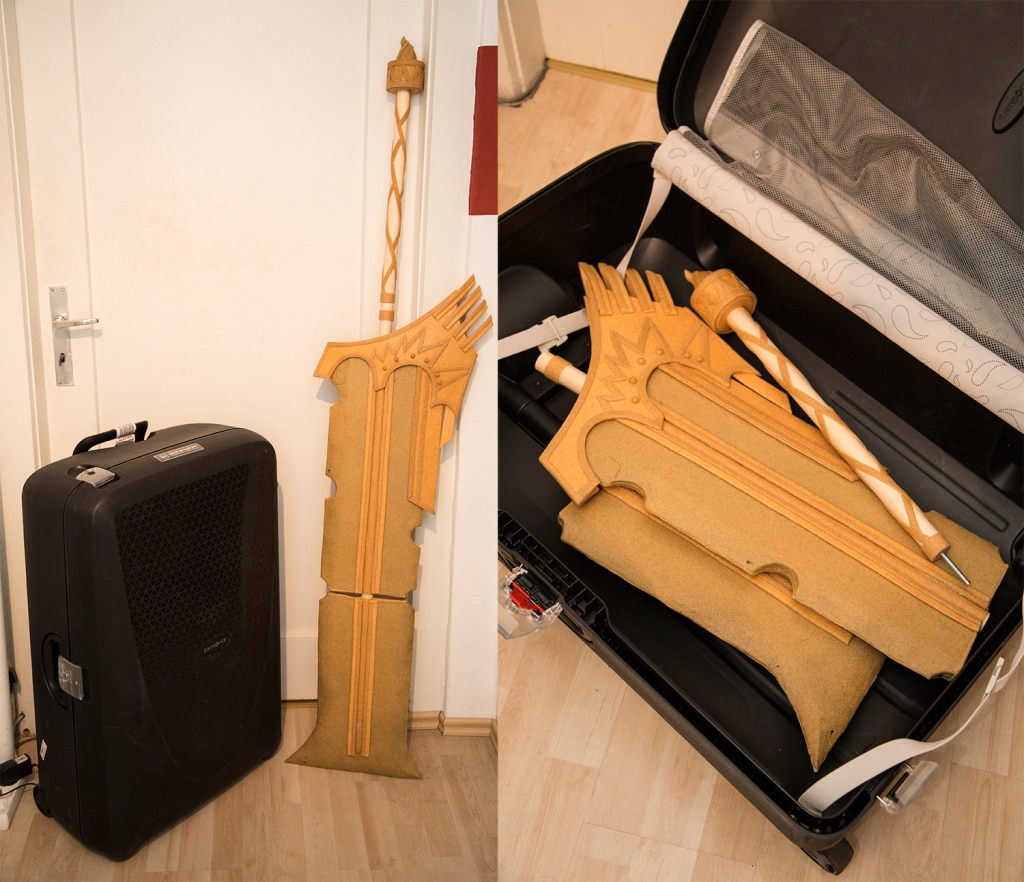 Well and that’s how the final paint job looks like. To get Worbla smooth I applied a few layers of Gesso and wood glue and sanded everything nice and smooth. The paint job was again done by Benni. I totally love how it turned out, especially for a job of only two days of rushed work.

After two weeks of hard work the costume was finally done, packed and crammed into one single suitcase – all three sword parts, every armor piece and even the helmet! One. Single. Suitcase. I was quite proud of that! Traveling however makes me always really nervous since I have no idea how the airport staff will treat my luggage and just hope it will arrive save and sound. So we arrived at the hotel in L.A. the very first thing to do is to unpack and check EVERYTHING. And well, thankfully it all looked great! I was happy! 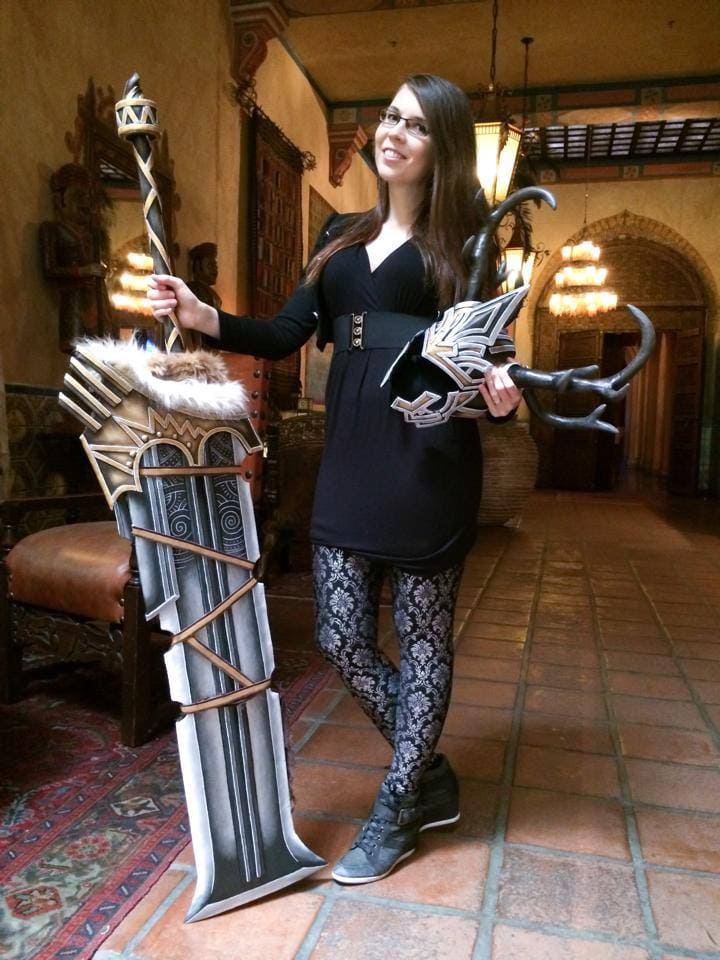 Debuting at Wondercon 2014 this was the final costume. Hope you like it! 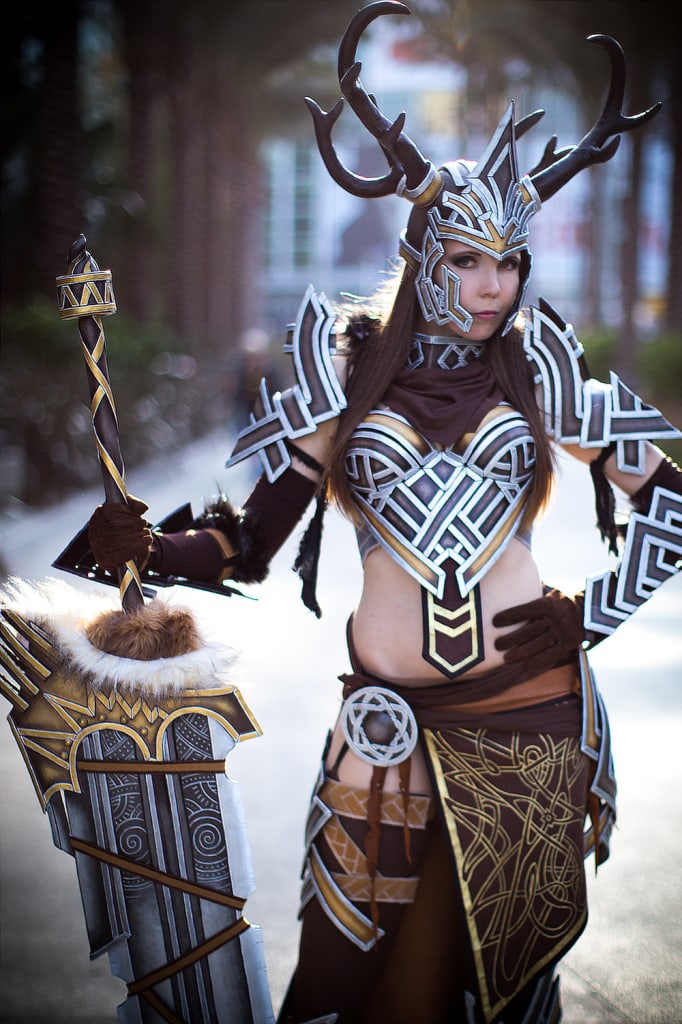 A this point a special thanks to Darshelle Stevens Photography for this great shoot of my new Norn Warrior costume! 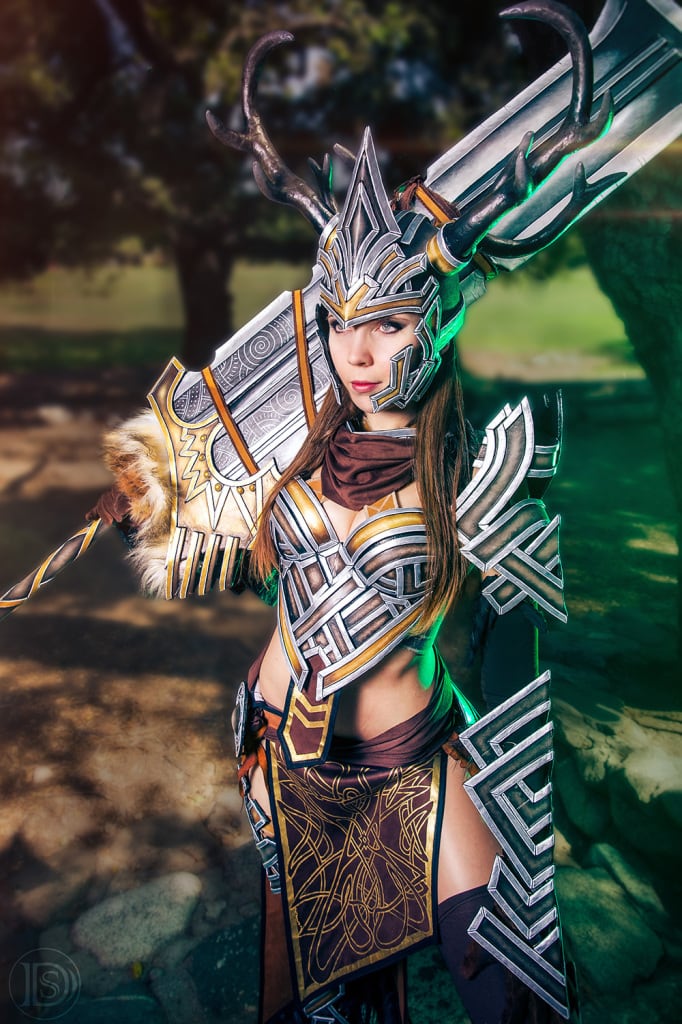 And a few shots from Benni: 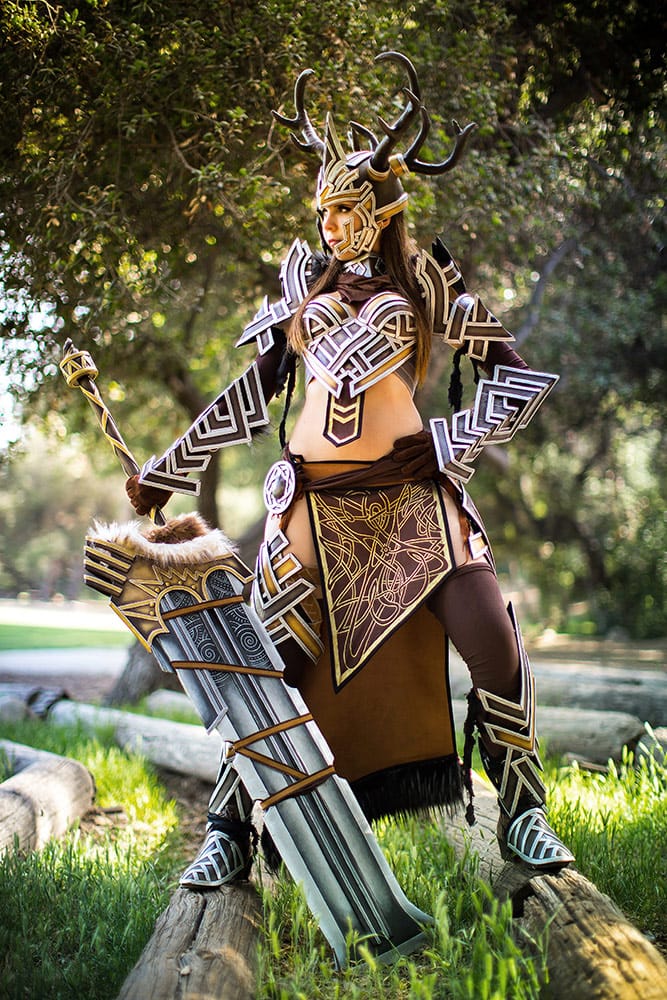 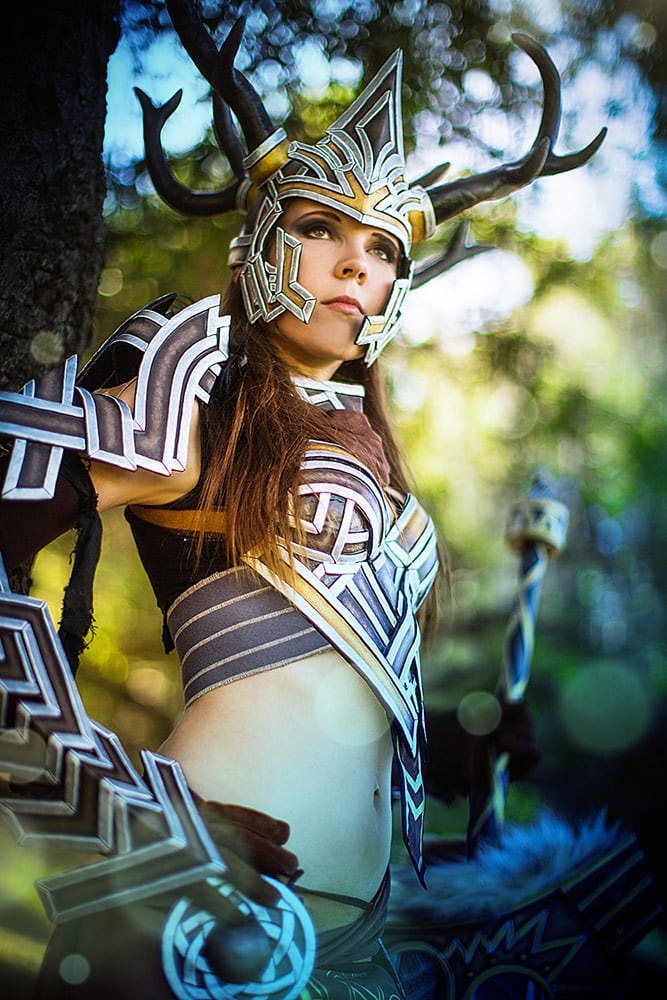 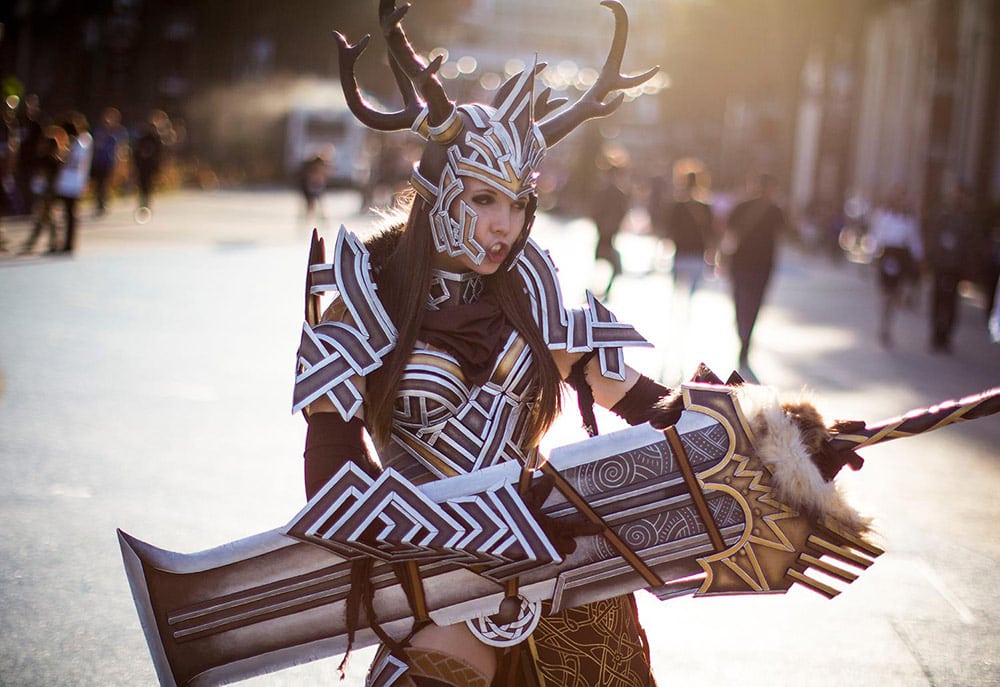 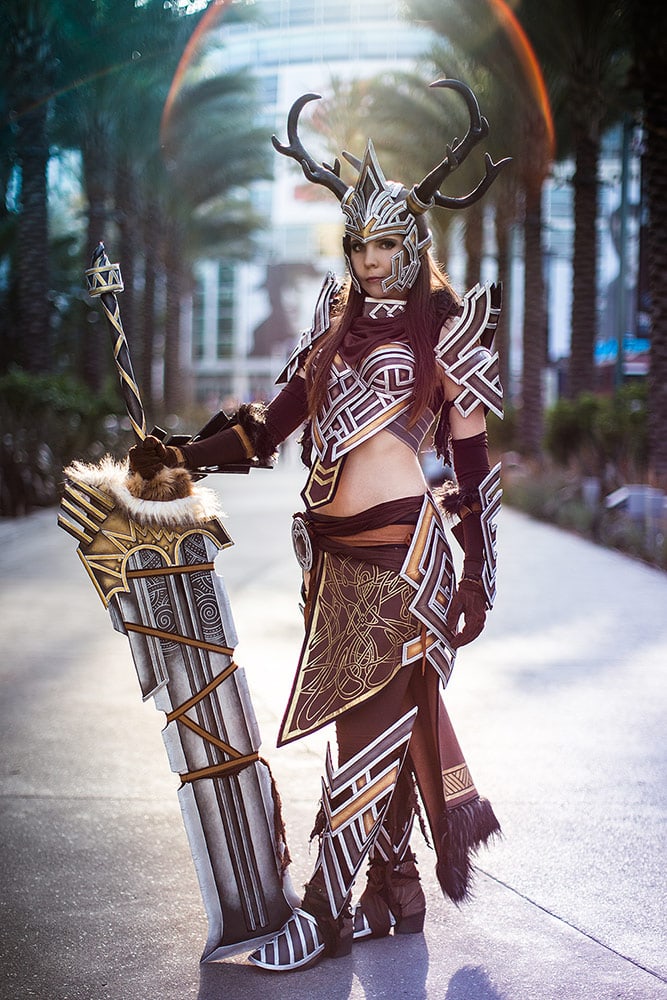 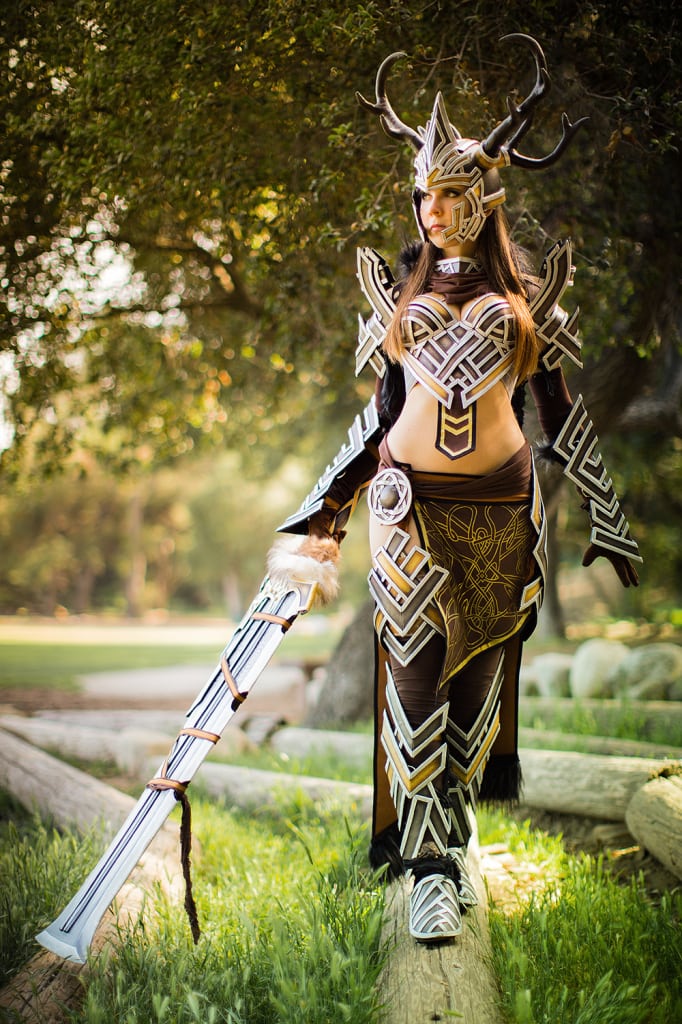